Your go-to source for performance boating.
HomeIn the NewsYowaiski to Cover Jammin’ on the James 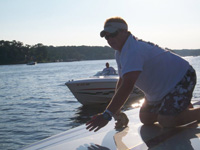 Mike Yowaiski, one of the best offshore powerboat racing announcers to ever man a microphone, will cover the Jammin’ on the James Poker Run, July 8-9, in Virginia next weekend for speedonthewater.com. He will be on site throughout the event.

Yowaiski entered the world of high-performance boating and offshore racing nine years ago as the driver of a “sweep boat” for the Chesapeake Bay Power Boat Association during the Cambridge Challenge.  During another event, performance-boat industry veteran Martin Sanborn asked him to announce a race. Yowaiski was a natural, and he became “the voice for the Offshore Performance Association.”

“That led to many great opportunities such as working for Miss Geico Racing where I was the public relations coordinator,” Yowaiski said.  “All the while I have been announcing OPA races from live broadcasts to television shows on Fox Sports and Versus. Racing is my passion, but I also enjoy just getting to go boating and, of course, doing poker runs. I’m looking forward to writing about Jammin’ on the James, which is one of the best yet most often overlooked poker runs in the country.”

Yowaiski will provide updates on speedonthewater.com throughout the weekend. His feature on the event will appear Monday, July 10.