While the Union Internationale Motonautique/World Professional Powerboat Association 2014 XCAT Series kicked off last weekend in Dubai—with the Dubai-based Victory team taking first, second and third place in the season-opener—the big news coming out the weekend was that XCAT racing is coming to the United States. Known for competitive offshore racing, the twin-outboard-engine canopied catamarans will take to the waters off Daytona Beach, Fla., April 11-13 during the annual Daytona Beach Speed Week. 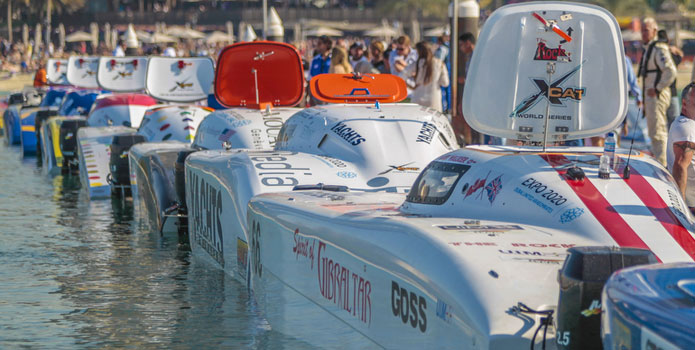 In 2014, XCAT catamarans will race in U.S. waters for the first time since the series was started six years ago. Photo courtesy/copyright Raffaello Bastiani.

“The most important thing is racing and with XCAT that’s what you get—a real professional race with evenly matched competition in a single class design,” said Gary Ballough, who has competed in the XCAT Series since it began six years ago. “If you are used to going to other venues and not knowing what you just witnessed other than a boat parade, with XCAT we promise you a race. Whether it’s for first or and second place or positions eight through fourteen, there’s a race going on between fierce competitors who are committed and contracted to the XCAT Worlds Series.”

At present, there are 14 teams competing in the XCAT Series with racers from 13 countries. In addition to Daytona Beach, other new race venues for the 2014 tour include Lugano, Switzerland; Napoli; Italy; Baku, Azerbaijan; and Hining Doa, China. Doctor Khalid al Zahed, the vice president of the WPPA said that “some parts of this 2014 season are still being finalized and are subject to change.”

American racer Jay Price of the Skydive Dubai XCAT teamed echoed Ballough’s sentiments. “I’m so happy to be a part of this series—this is the premier powerboat racing in the world and it’s growing,” he said. “Now we’re going to be racing in America, I haven’t been racing in American for 20 years while I’ve been racing everywhere else. Fans in the U.S. fans are going to see that XCAT is a second-to-none series with match races and a grand prix of 15 closely matched boats. It is so exciting.”

Editor’s Note: Broadcaster, play-by-play man and radio personality based in Key West, Fla., Todd Swofford has covered offshore powerboat racing for 32 years and was on assignment in Dubai for the first XCAT race of the 2014 season. This is his first contribution to speedonthewater.com.