Your go-to source for performance boating.
HomeSafe BoatingSafe BoatingInsurance OptionsWozencraft and Martin Team Up for Day Off the Water

Wozencraft and Martin Team Up for Day Off the Water

Wozencraft and Martin Team Up for Day Off the Water

Partners in keeping drivers and their boats in good hands on the water, Devin Wozencraft and Tres Martin set out on a train ride together in North Carolina’s Great Smoky Mountains this week. Photo courtesy Devin Wozencraft

Although he has a solid business and personal relationship with Tres Martin thanks to the many times they’ve worked with one another, Devin Wozencraft of Wozencraft Insurance in Southern California didn’t expect to be enjoying a getaway with his wife, Julie, on the other side of the country and all of the sudden be spending the day with the namesake of the Tres Martin Performance Boat School.

But that’s what happened earlier this week for Wozencraft, who has been in Asheville, N.C., as part of an achievement club put on annually by Farmers Insurance called Toppers Club, which he said is a reward trip for the top 10 percent of the agency’s force. Wozencraft called Martin to refer a client, who they were writing a policy for on a 36-foot Skater Powerboats catamaran, to the performance boat school.

“During our conversation, I told Tres that I was in Asheville and he said that he was only an hour from us,” Wozencraft said. “I told him that I would buy him a ticket for the Great Smoky Mountains Railroad along with Julie and I if he’d drive us. Which is around an hour and fifteen minutes from our hotel. He said ‘Absolutely, I’ve never been!’

“So we hooked up and spent the day together in the Great Smoky Mountains of North Carolina,” Wozencraft added. “It was truly a great day and nice to catch up with my good friend … somewhere other than on the water or around a boats.

Click the image at right to enlarge the additional images from the Wozencrafts’ and Martin’s day together. 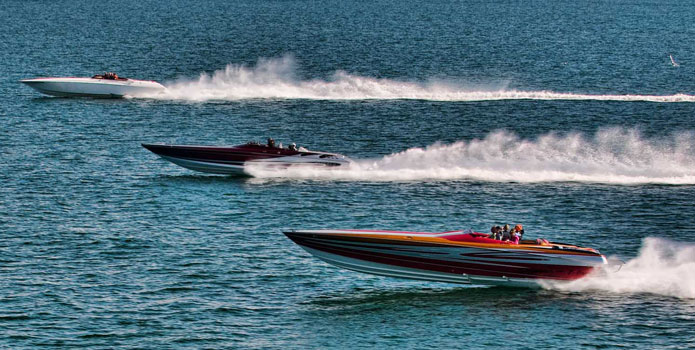