Your go-to source for performance boating.
HomeIn the NewsWounded Warriors: Boating and Bonding in Atlantic City

“Amazing,” “unbelievable,” “a rush,” and other superlatives that will never be read on a family boating site is how a group from the  Wounded Warrior Project described their day on the water with members of the New Jersey Performance Powerboat Club.
The club hosted some 45 veterans and their families for boat rides and a reception in their honor as part of the Atlantic City Festival of Speed today. It’s nothing new for NJPPC to give back to their community through events like Shore Dreams for Kids, a day of boating for physically and mentally challenged children and adult held each July. 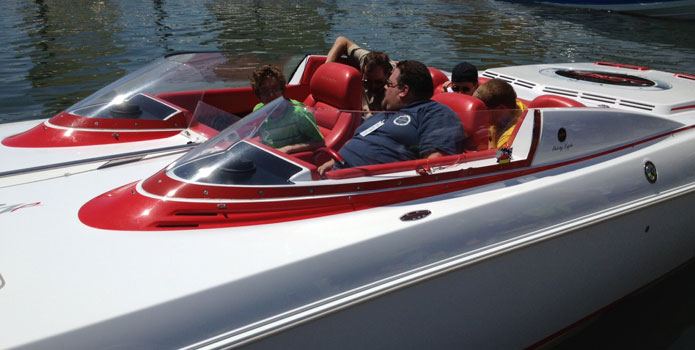 Tom Anselmi was one of several NJPPC members who gave rides to members of the Wounded Warrior Project and their families today. All photos courtesy/copyright Tim Sharkey/Sharkey Images.

Bob Christie, whose 38-foot Statement with quad Mercury Verado outboards was tied to the dock just long enough for passengers to load and disembark during the four-hour event, summed up the sentiment of club members.

“Look at what we have here—look at what we enjoy,” he said, gesturing around him at billions of dollars of boats and yachts in the Golden Nugget Marina. “And we enjoy it because people are willing to defend our freedom and do things we don’t have to do, and I can’t thank them enough. It’s worthwhile and it’s the least we can do.”

The day was important to Nick Lucarelli, an Army National Guard member who did two tours of Iraq, to learn more about boating.
“During my first tour, I was trying to find my ‘happy thought,'” he explained—a state of mind soldiers hope to achieve as relief from their stressful conditions in a theater of war. “My ‘happy thought’ became being on a boat in the Mediterranean off the coast of Italy where my family is from, relaxing and sipping a glass of wine. I had to learn more and the Wounded Warrior Project and the New Jersey powerboaters made that possible.”

Said NJPPC member Bob Christie (far right): “We enjoy it because people are willing to defend our freedom and do things we don’t have to do, and I can’t thank them enough. It’s worthwhile and it’s the least we can do.”

Andrew Correa, no stranger to adrenaline rushes as an Army Ranger with two tours each in Iraq and Afghanistan, was still impressed with his ride.

“The combination of speed and comfort of the ride, having the adrenaline rush yet knowing you are completely safe,” he said. “It’s been a while since my dog tags were flying [out behind my head]. It’s a feeling of ‘safe danger.’ It’s difficult to put into words.”
But Correa’s lady friend Candy Ruiz had no trouble articulating it. “We went airborne, but when we came down it was all cushiony,” she said.

“Days like today can change a Wounded Warriors life—and not just theirs, but [their families],” said Tony Ntellas, the Northeast Alumni Coordinator for the Wounded Warrior Project, who emphasizes that not all injuries are visible ones. “Post traumatic Stress disorder, traumatic brain injuries are ‘invisible’ injuries, which can be every bit as bad, or even worse than the visible injuries. A shared experience like this lets veterans come together and allow their family to meet other families, and learn that they are not alone and perhaps talk about it for the first time. We stress the networking support.”

Correa explained that the military is like a family, men and women one comes to rely on, and he was happy to find a similar bond through Wounded Warriors. “To have that same feeling here at home, to know that everyone in the group has your back is very comforting,” he said.

And Ruiz bears witness to that. “I’ve seen a beautiful side of him at these events,” she said. “I’ve seen him express himself with this family in ways he never has with me or his blood family.”

For Christie, the family aspect of the day was a cherry on top. “To be able to take them out and have them ride he boat at 70 or 80 miles per hour and enjoy the wind in their face was very special, especially when they bring their kids,” he said. “It’s something they’ve never experienced. We enjoyed it a great deal and I can’t wait for the next time.”

The NJPPC family stepped up big time today to provide boat rides for veterans injured in the line of duty.

Editor’s Note: The former director of media relations for Mercury Racing, Tony Esposito is a long-time journalist based in Fond Du Lac, Wis. Esposito will provide updates on the Atlantic City Festival of Speed to speedonthewater.com throughout the weekend. To view Tim Sharkey’s complete gallery from the run, click here.