Your go-to source for performance boating.
HomeCommentaryWillie Schaefer: Celebration of a Grassroots Racer 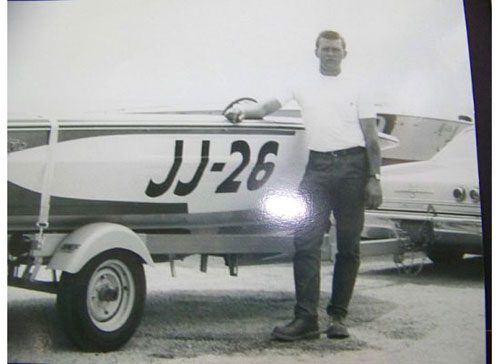 Willie Schaefer, a man “who would put as much effort into your boat as his own.”

It was a simple ceremony on June 10, 2911, at K&K Outboard on Long Island, New York. There was a lot of good-natured ribbing and some heartfelt words from his family.

You probably never heard of a fellow named Willie Schaefer. On the other hand, K&K was the racing birthplace to a bunch of racers including Barry Cohen (of Ghost Rider and Barcone fame), George Linder, The K&K Ghost boats, Pete, Ken Sr, Ken Jr, and Jeff Kalibat, Jim Grillo and yours truly. Willie had a hand in helping all of those people and many others.

After coming out of the Navy in the ’50s, Willie Schaefer became a master marine mechanic, and settled at, the then-brand-new K&K in 1960 or so. Ken Kalibat, Sr., had recently converted an old gas station into a dealership for Scott outboards and Glastron boats.

Willie had a hand in everything from construction to boat setup and repair. Frankly, he could do anything that involved physical labor. These skills were given freely to his friends and he loved the all-nighters that are part and parcel of boat racing preparation.

Willie was also fearless and his exploits could fill a book. He once changed a few of the spark plugs in my twin-engine outboard, 16-foot Glastron—during a race with the engines running! He raced a bit himself, always putting a bit too much power in a bit too little hull, and did pretty well. He even won the Miss America Marathon in Atlantic City back in ’68.

But where Willie really set himself apart was in helping others. He would put as much effort into your boats as his own.

You see, Willie represented the grassroots racer who built the sport we love. Operating within a simple sensible budget (and at times spending more than he had), totally lacking in ego, not a big party animal, guys like him were the backbone of most classes in boat racing. No flash, no false bravado, but someone who you would want at your back when things got really tough.

In that way, Willie was on a par with folks like Bill Sirois, Bill Downard, Jeff Hutchins, Grandpa Seebold, Sam Griffith, Jim McCormick of “Madison’ fame and so many others on whose shoulders we stand today. These are guys who lived for racing and had a passion that withstood the test of time. Whether behind the wheel, in the shop, or toiling in the pits, they were “boat racers” to the core. Somehow, without sponsorship money, fancy driving suits, multi-trailer pit support units and a crew of public relations types, they took the sport from nothing and made it something.

This “something” attracted spectators, became annual festivals in small, medium, and large communities, drew similarly budgeted competitors, sustained through all kinds of economic cycles and resulted in amazing levels of competition that are burned in the memories of those who witnessed it years later.

The evolution was a natural one. You start simply, build enthusiasm and competition, let the winners win and the losers learn the price of success, keep your hat size under control and race for all your worth. Willie and scores of other true heroes did that and we owe them a huge debt of gratitude.

Today, we worship at the altar of a tiny handful of over- blown, exotic mega-boats with the budget of a developing nation, and try to build a sport beneath those behemoths. Perhaps we have it backward. For without true boat racers, we have nothing at all.