At the Los Angeles Boat Show a few weeks ago I was chatting with Gene Willen, owner of Howard Custom Boats in Valencia, Calif., when he asked me if I had seen the big Sea Ray a couple of boats down the aisle from the beautiful 28 Sport Deck and 28 SDS models he had on display. 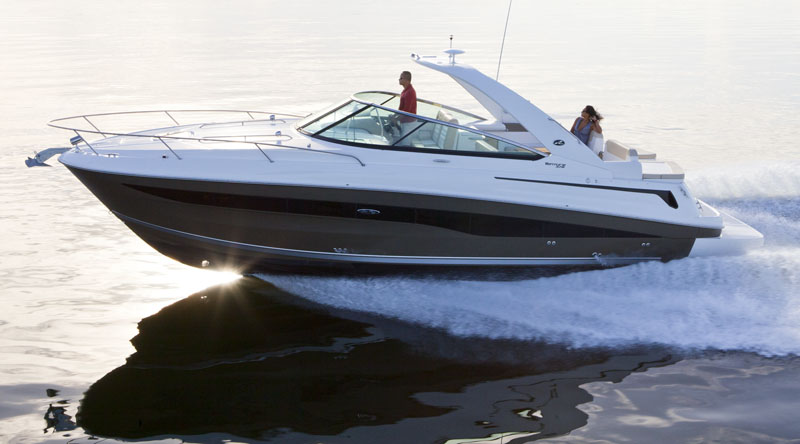 Yes there really are two outboards powering this 37-foot cruiser from Sea Ray.

I told him no, then looked at him like why would I. He stopped our discussion, told me to walk over to the back of the boat and said that I’d never guess what was in it. After maybe 20 to 25 steps—and a handful of guesses as to the power inside the engine compartment—I looked at the boat and thought wow that’s different, yet it makes perfect sense. On display was Sea Ray’s new 370 Venture, featuring a patent-pending design with two concealed Mercury Verado 300 outboards.

I’ve seen plenty of outboards hanging off the transoms of center consoles and catamarans, but two hidden underneath a cruiser—that’s why I had to write about a boat with a top speed in the 40-mph range, far from speed on the water. Obviously the judges for this year’s Innovation Awards at the Miami International Boat Show were impressed as well. The 37-footer was one of 10 marine products recognized at the show for innovative achievement by the National Marine Manufacturers Association (NMMA) and Boating Writers International (BWI). See the complete list here.

In a press release from the company, Director of Marketing Joe Cacopardo said the award recognizes the emphasis Sea Ray places on developing and championing new technologies. In honoring the 370 Venture in the Power Boats category (25 to 60 feet), the judges noted that the boat uniquely incorporates cutting-edge propulsion technology in a fiberglass express cruiser powered by fully concealed outboard engines, giving boaters another option when it comes to powering a mid-sized cruiser.

As I can attest from looking over the boat at the L.A. show, the smaller footprint of the outboards adds a whole new dimension to the cockpit and cabin in a boat of its size. Sea Ray is right when it says the trademarked Concealed Outboard Propulsion found aboard the 370 Venture combines the best traits of outboard and inboard power. The rewards are quieter operation, better shallow-water capabilities, lower maintenance costs and remarkable onboard space.