Your go-to source for performance boating.
HomeIn the NewsWar of Words Continues Between Granet and Sheikh Hassan

Despite that their boats will be racing in different classes during the Super Boat International Offshore Key World Championships next week, driver Sheikh Hassan bin Jabor Al-Thani of the turbine-engine-powered 50-foot Mystic catamaran Al-Adaa’am 96 and driver Marc Granet of the piston-powered 41-foot Miss GEICO cat continued their war of words today. Since the 2013 offshore racing season started, Sheikh Hassan have jabbed at one another in a good-natured, yet decidedly competitive fashion. 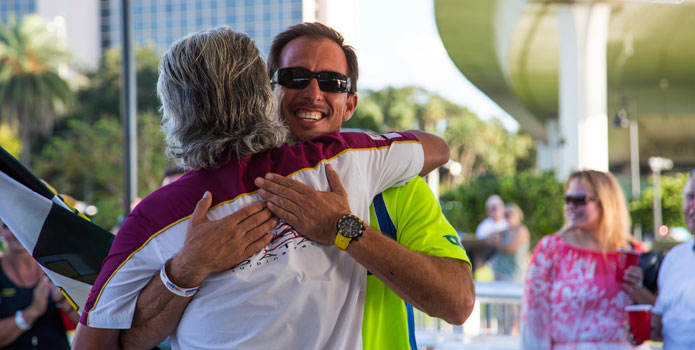 Close friends off the racecouse and fierce competitors on it, Marc Granet and Sheikh Hassan bin Jabor Al-Thani are gunning for each other in Key West.

Though their rivalry actually begin in 2012, the inter-team feud escalated to its current level when Miss GEICO stepped up to the Turbine class to compete with Al-Adaa’am 96 at the SBI World Championships in Clearwater, Fla., last month. Neither boat had competition in its class, so the two teams squared off against one another—with Al-Adaa’am 96 taking the win after Miss GEICO spun out.

The rivalry has not cooled since the Clearwater event.

“Marc (Granet) is the big target,” said Sheikh Hassan in a press release from the Qatar team. “We are sure to be racing against each other in that important final race and there is so much at stake. Steve (Curtis, throttleman for the 50-foot Mystic cat) and I won the Key West World Championships last year and that is our goal again.

“We know that Marc will come out fighting,” he continued. “But we have more to give and will test again in Key West to make sure that we are fully prepared. This is a three-race format, so we need to make sure that we make no mistakes in the first one to give us the best chance for the final race.”

Despite that the teams will race in different classes at the SBI Key West Worlds next week, the competition between them remains.

Countered Granet, “When you are on top, you always have a target on your back. Sheikh Hassan forgets we have more seat time in racing a turbine Mystic offshore boat than anyone. We know its strengths and its weaknesses. We’ll use that knowledge to go after the ultimate offshore trophy—first overall, Top Gun, in Key West.”

A Fresh Start for the Parker Enduro