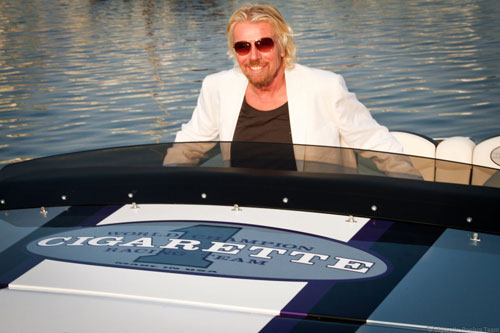 According to a press release from Cigarette in Opa-Locka. Fla., the company and Branson staged a reenactment of a scene from the Miami Vice television show. Branson, playing the show’s lead character Sonny Crockett, overtook an adversary in the 38-foot Cigarette. His adversary was played by supermodel Karolina Kurkova.

Cigarette’s Bud Lorow piloted the boat with Branson on board for the reenactment.

“I didn’t get much of a chance to talk to him, but he seemed like a nice guy,” said Lorow of his high-profile passenger. “He didn’t get to drive the boat because we really didn’t have time.”

Sunny Isles Beach Offshore Challenge: On Site for the Weeken...