Your go-to source for performance boating.
HomeIn the NewsUnlimited Hydros Likely To Run Biofuel in 2012 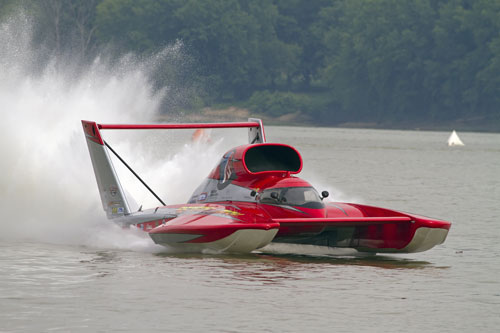 If all goes to plan, Unlimited hydroplanes in the Air National Guard Series will run biofuel next season.

The Air National Guard Hydroplane Series has created a “blue ribbon task force” to convert the sport to biofuel for the 2012 racing season, according to a press release from the organizers. Sam Cole, the series chairman, has appointed Washington State University regent Scott Carson to head the conversion effort. Carson is the former chief executive officer of Boeing Commercial Airplanes, and he reportedly pioneered the biofuel conversion for Boeing’s commercial aviation using an Unlimited hydroplane several years ago.

According to Boeing, the fuel is a blend of camelina-based biofuel and traditional kerosene fuel (Jet-A). The task force will look at the feasibility of the tour’s 14 turbine-powered hydroplanes using the fuel and the added costs associated with the conversion.

“Scott (Carson) has been the leader in pushing our sport to take this step,” Cole said in the release. “I have no doubts that unless there is a compelling reason most of our teams will make the switch next season.

“Boeing used the U-787 of Erick Ellstrom to test and perfect biofuels for commercial jet engines,” Cole continued. “They learned a great deal and have offered support and assistance with dialing in this technology with our sport.”

With Chip Hanauer driving, the U-787 established a biofuel speed record with lap of more than 153 mph in 2009 in Seattle. Hanauer’s run culminated more than two years of work by Boeing engineers.

“From a drivers’ point of view, if you didn’t tell me it was a biofuel I would have never known,” Hanauer said in the release. “The performance was as good, if not better, than a petroleum-based fuel.”

Shore Dreams Pictorial: The Rides That Made it Happen