Your go-to source for performance boating.
HomeIn the NewsU-11 Peters & May to Campaign Rebuilt Miss Budweiser

After an accident in Doha, Qatar, in February, the U-11 Peters & May team agreed to a deal with Schumacher Racing to purchase the former Miss Budweiser T4 hull, which was damaged “beyond repair” at the 2010 Detroit Gold Cup. Since then, the team has been cranking away on a complete rebuild of the legendary hydroplane and plans to debut the rebuilt T4 hull at the second race of the 2013 H1 Unlimited season in Sacramento this weekend. 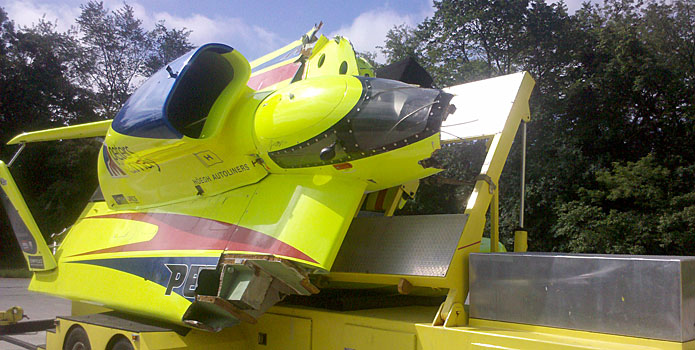 After a crash at the 2010 Detroit Gold Cup, it was assumed that the T4 hull would never race again. Photo courtesy Peters & MayAccording to a press release, plans are also in place to rebuild the previous U-11 UIM record-holding boat (read the story) damaged in Doha and keep it as a backup hull.

“In Doha we came to the conclusion that our previous hull was severely damaged and due to the schedule would not be back in the USA until the end of April,” said Scott Raney, co-owner and crew chief of the U-11 team. “That simply did not leave us enough time to get her prepared for the second race of the season so we had a discussion with Dave Holley (CEO of Peters & May) and unanimously decided to take on the challenge of bringing T4 back to her former glory.”

Holley said the team has done quite an unbelievable job considering the extent of the damage and the time they had to work with. 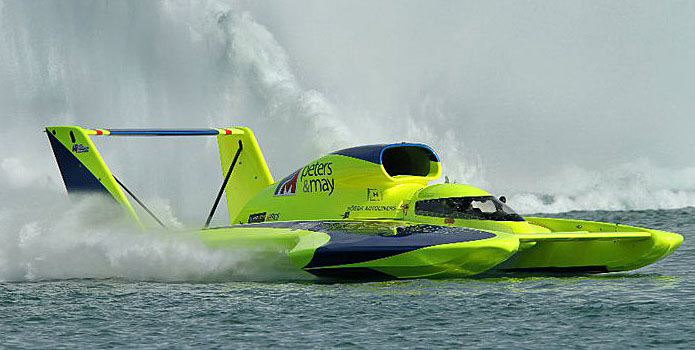 The Unlimited Racing Group purchased the former Miss Budweiser T4 (shown here racing in 2010). Photo courtesy Peters & May“They have literally performed a miracle,” Holley said. “It just shows what you can achieve when you have a crew with unrivaled knowledge that is willing to put in the effort and time to get the job done. This would not have been possible without the support of some of the teams’ associate sponsors, in particular J&D’s Hydraulic & Repair Company, Central Welding Supply, West Coast Collision Center, Kings Marine Canvas and Primus International. We all have fond memories of T4 and I am delighted that the Peters & May name is back on the boat that originally brought us into this wonderful sport.”

The T4 was originally constructed in 1994 as the futuristic two-wing T4 for the Budweiser team, but the design was quickly outdated by rules surrounding fuel-flow to the powerful turbine engines. The hull was relegated to display duty until purchased by the U-8 team in the winter of 2002 and reworked to become a conventional hydroplane. The ‘new’ boat was successful right out of the box, winning in just its third race.  Since 2005, the T4 had consistently been one of the fastest hydroplanes on the H1 Unlimited  circuit until the devastating accident that caused its demise in 2010.

Peters and May to Become Official Logistics Provider of the APBA

Image of the Week, Part II: Skimming Across The Pond