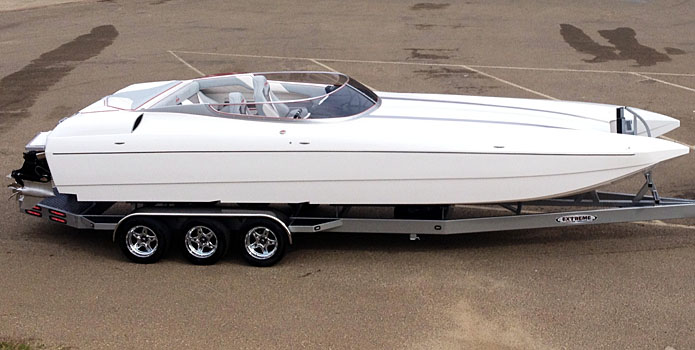 DCB recently finished its third M29 catamaran, which is powered by twin Mercury Racing 565 engines, and will have it on display at next week’s Los Angeles Boat Show.

I woke up this morning to an email from Tony Chiaramonte of Dave’s Custom Boats (DCB) stating that the company’s latest M29 catamaran—featuring a pair of Mercury Racing 565 engines—reached 120 mph during a testing session Thursday at a San Diego County reservoir near the DCB facility in El Cajon, Calif.

The third boat from the mold—the first has twin Mercury OptiMax 300Xs outboards and No. 2 has one turbocharged Mercury 1350 engine—the M29 features a subtle white graphics package with a thick gray stripe and a red pinstripe on the deck and transom.

“The new M29 with twin 565 engines was amazing our first time out,” Chiaramonte said. “Right off the trailer, the boat ran 120 mph on the rev-limiter with a set of 15.25″ x 33” five-blade propellers from Hering Propellers. The boat handled great—it’s an incredible package.”

The 29-foot catamaran, which is for sale according to Chiaramonte, is going to be on display at next week’s Los Angeles Boat Show at the L.A. Convention Center along with the company’s red M41 and a new M31.

At the same time as the L.A. show, DCB is going to have the single-engine M29 on display at the Utah Boat Show in Sandy in conjunction with EKF Custom Marine and Motorsports, which also will have an Advantage Boats 29 X-Flight and a 28 Heat from Nordic Boats, both with Mercury power plants.