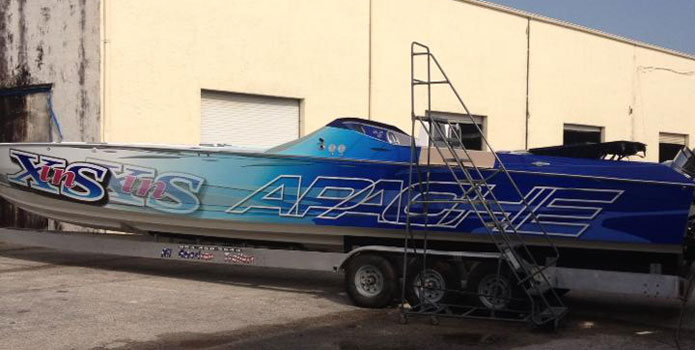 While weather forced Scott Begovich and the crew from AMF Offshore Rigging to cut short last Thursday’s first on-water test—and scrub Friday’s test session—of the turbine-powered 47’ Apache the West Palm Beach, Fla., shop has been working on for more than a year, mechanical gremlins struck today. Thanks to water-contaminated fuel, the run/stop switches for the twin 1,500-hp turbine engines were sticking and forced the crew to cancel testing.

“The first batch of fuel had water in it, and that might have caused some corrosion that had the run/stops freezing up,” Begovich explained. “You don’t shut off turbine engines with ignition. You shut them off by cutting off their fuel, and that’s part of what the run/stops do. They work in two stages, start-up and throttle fuel. In the worst case, if the run-stops stuck open we wouldn’t be able to shut off the motors, even if we disconnected the batteries.”

Begovich said the replacement parts should reach the shop by the end of the week. They plan to run the 47-footer early next week.

“The customer is coming on the 17th,” he said. “We want to make sure everything is perfect.”

Editor’s note: Look for updates on this project as they become available.