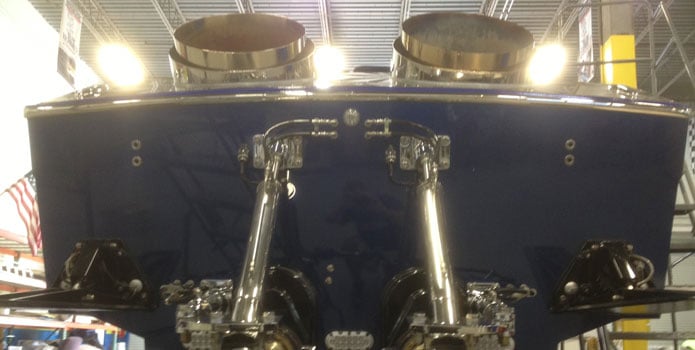 With one member of the AMF Offshore Rigging shop team on board, Scott Begovich, the throttleman for the Miss GEICO racing team, put a 47-foot Apache V-bottom the outfit recently restored and repowered with twin 1,500-hp turbine engines through its first test session this morning. Renowned rigger Gary Stay and his crew at the West Palm Beach, Fla., shop have been working on the classic boat for more than a year.

Begovich tested the boat on the calm waters of Lake Worth Lagoon in Riviera Beach. As today’s run was the boat’s first time on the water since AMF completed the rigging and restoration work, he said he took a conservative approach and only ran the 47-footer to 90 mph.

“There were no issues whatsoever,” said Begovich who handled the throttling and driving duties, during a telephone interview this afternoon. “I didn’t run it all the way out, just accelerated to 90 mph. The acceleration was smooth, sort of like a subway train that just keeps on pulling. We brought it back in and checked every nut and bolt. We planned to run it again this afternoon, but the weather came in.”

Begovich said that, weather cooperating, he plans to run the boat again tomorrow morning. He estimated that it eventually will top out in the low-120-mph range, and said he believes the boat, which rides on a non-stepped conventional V hull, has the stability to handle the kind of speed.

“It was accelerating pretty hard through 90 mph, and boat was stable—it wasn’t chining at all. But we’re taking baby steps because this is such a unique thing. It’s an old V-bottom with turbine power.

“What I did was bring it up on plane, then put the throttles all the way forward, as you do with a turbine,” he continued. “That’s when a turbine accelerates hard. At 80 mph I started to bring it back, and at 90 mph I parked it. I wasn’t able to look at the N1 and N2 percentages because I was the only one running the boat and I had to pay complete attention to what I was doing, but at 90 mph I would say it was at the equivalent of three-quarter throttle.”

Editor’s Note: Look for an update on the turbine-powered 47’ Apache tomorrow afternoon if its second test session takes place on schedule.