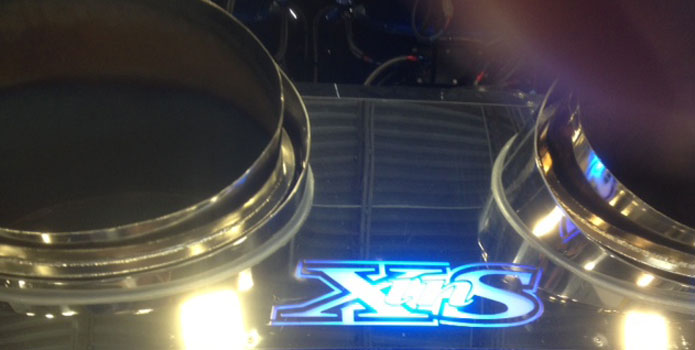 After a few postponements, the turbine-powered 47-foot INXS Apache that’s been getting a complete makeover at AMF Offshore Rigging for more than a year hit the water today for its final test run before the owner arrives to take possession of the boat tomorrow. With Scott Begovich of the West Palm Beach, Fla., rigging, restoration and racing shop at the controls, the twin 1,500-hp turbine V-bottom reached 100 mph—and had still had more in it, according to Begovich.

“It was like a subway train on rails at 100 mph,” said Begovich in a telephone interview this morning. “We went over wakes from a 30-foot cruiser at that speed and we didn’t even feel them.”

Begovich had previously estimated that the 47-footer would be able to reach 120 mph. While he said he’s still confident that the conventional V-hull can hit that speed, he opted not to push it past the 100-mph mark this morning.

“We’re racers, but we’re very conservative when it comes to our pleasure boat projects,” said Begovich, who throttles the Miss GEICO offshore racing catamaran. “This is a new setup and an older hull, and I’m not completely comfortable with it just yet. The owner isn’t clamoring for the top speed, and we’re not clamoring for top speed. The last thing you’d want to do the day before the owner comes in is to break something or hurt the boat.”

Begovich said he plans to run the boat offshore with the owner on Friday.

“I’m going to be teaching him how to the run boat,” said Begovich. “We’re looking forward to getting it offshore.”