Your go-to source for performance boating.
HomeIn the NewsTug It and Lilly Sport Boats Joining Forces for SBI Worlds

Two of the top teams in the Offshore Powerboat Association’s Super V Light class during the 2013 season are joining forces to compete in the Superboat Vee class at the 2013 Super Boat International Key West Offshore World Championships next month. Throttleman Kevin Smith of Tug It Racing, a 30-foot Phantom Speedster that finished second in points during the OPA regular season and second at the OPA World Championships in Ocean Beach, Md., and Brit Lilly of Lilly Sport Boats, which finished third in OPA regular points and took first at the organization’s Worlds, will team up in the cockpit of Smith’s 30-footer SBI’s three-race format Key West event. 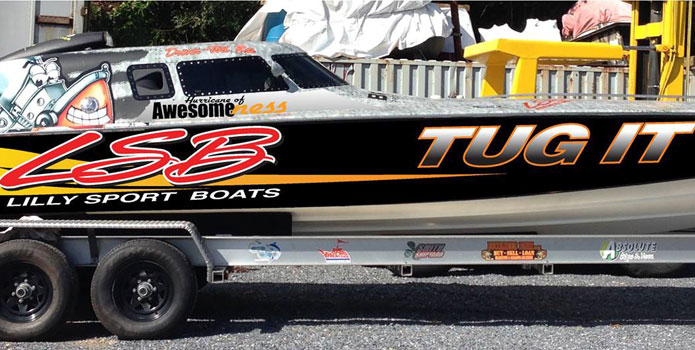 Graphic transformation from Tug It Racing to Hurricane of Awesomeness is underway for Smith’s 30-footer.

Both Smith and Lilly live in the Baltimore, Md., area and both of their boats were maintained and stored during the OPA the season at Lilly Sport Boats. “We always said we were two teams, but one big family,” said Lilly, who at 27 years old just completed his first full season with his father, legendary throttleman Art Lilly, sharing the cockpit with him. (Read the story.)

“Brit ran with me at the OPA race in St. Clair, Mich.,” said Smith, age 36. “We just clicked right away together. We were both really comfortable in my boat.”

Currently being rewrapped with new graphics, the new team will be called Hurricane of Awesomeness. Smith will throttle and Lilly will drive.

“We are gunning for Doc (Michael “Doc” Janssen) in the Snowy Mountain Brewery Outerlimits, Steve Miklos in Sun Print and the new Fountain boat,” said Lilly. “It’s time to show what OPA racing stands for and let everyone know that those two new boats aren’t any better than the older ones. I can absolutely say that Kevin’s boats was the fastest Super V Light on the OPA racecourse this season.”

“Brit and I learned so much this year from his dad,” said Smith, who shared the cockpit this year with veteran throttleman Will Ross. “We’re not being cocky, but we think as a young team we can do pretty well against the competiton in Key West.”

“It’s a first for me, racing in Key West,” said Lilly. “I couldn’t be more excited about it.”