There are two types of go-fast boat operators: Those who have made a mess out of docking at least once, and those who will. No matter who you are, much less think you are, it inescapable. And chances are your worst docking moment will come when a crowd is watching. It’s just the way of things. 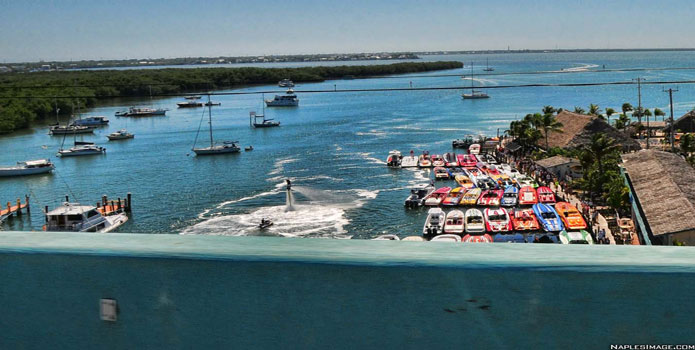 Even with big groups, docking doesn’t have to be big drama. Photo courtesy/copyright Jay Nichols/Naples Image.

Several years ago, I watched one of the biggest names in high-performance boating struggle to get a 36-foot catamaran on a trailer—the rolling equivalent of a dock if you will—for more than half an hour in 25- to 30-mph gusty crosswinds compounded by the seriously unfavorable downstream approach,the only one available, he was forced to take. In the end, it look four of us standing in waist-deep in the water and helping guide the cat onto its bunks to make it happen. This guy had forgotten more about bringing a boat to the dock or getting it onto trailer than most of us will never know, and yet on that day in those conditons he couldn’t make it happen—at least without risking an expensive paint job—without help.

“You don’t get killed docking a boat,” say Tres Martin, the founder of the Performance Boat School that bears his name. “But there are ways to make it a lot easier and a whole lot less of an adventure.

“A boat will always make it to shore,” he adds and laughs. “You just need to help it. You don’t need to force it. The No. 1 mistake I see people make is they hurry. They get impatient and aggressive, and then they try to manhandle the boat to the dock. And that’s where they get into trouble.”

Docking is, by nature, full of variables. You may be backing into a slip or docking bow in—or just pulling up to a long dock on either side. You could be pulling your boat onto a trailer. The current could be going in one direction, the wind in yet another. Point being: Each situation may require a slightly different approach. Still, Martin offers some basic tips that can make your life at the docks a whole lot easier.

•Slow down—What you do right now in a boat often takes a moment to take effect. Whether you’re bumping it into forward or reverse, make the action (and go slow small with such actions) and wait for it to take effect. Don’t be impatient. “Never hurry,” says Martin. “You’ll get there. There’s no rush.”

•Go against the grain—Whether you’re talking about current or wind, you want to dock against it. Those two forces act as brakes against your boat. That means backing into the wind, if at all possible, in stern-to docking situations. It means, again if at all possible, pulling onto your trailer into rather the wind rather than with it. If you find yourself in crosswind situation, you want to head/back into the slip as upwind as possible.

•Use the 60/40 rule—Propellers are designed to create forward thrust. That is the direction in which they are most efficient. That means you need more reverse thrust to counter forward thrust. Martin advises that you use 60 percent reverse to 40 percent forward thrust during your docking maneuvers.

•Start with the right amount of space—Whether you’re backing into a slip or entering it bow first, giving yourself too much or too little space can create headaches. Martin says that people tend to err on the side of too much space and end up in state of constant correction with steering, forward and reverse shifting and throttle input. “When you’re backing into a slip, you want to be stopped about the width of your boat from the end of the dock and about one-half of a boat length past it,” says Martin says. “And when you back into a slip, it is very important that you ‘swing’ your nose toward the wind, because that will help bring it back to the dock. Most of your boat—70 percent—is above the waterline so wind has a great effect on it. All of your power and steering control is at the stern, so you want to use the wind to help you bring the nose to dock.”

•Trim out for better reverse thrust—In neutral or negative trim, the thrust from a boat’s stern drive tends to bounce off its transom, says Martin. For that reason, he suggests keeping your trim tabs neutral and using slightly positive trim when you put your boat in reverse. “If the drive is trimmed out a little bit, the reverse thrust goes underneath the hull instead of into the transom, and that helps you keep better momentum when you’re in reverse,” he explains.

Tres Martin’s Safety Corner: When Any Is Too Much