Italian driver Alex Carella of the Qatar Team controlled the race and controlled his own destiny leading every second of the 38-lap Grand Prix of Sharjah (UAE) in front of tens of thousands of race fans along the Khalid Lagoon at the sixth and final round of the 2013 Union Internationale Motonautique F1 H2O World Championship. 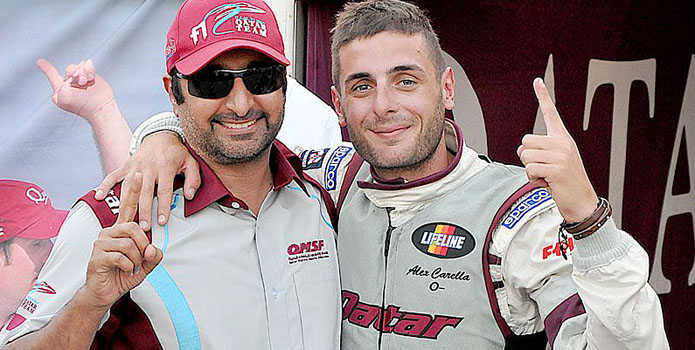 Three-time world champion Alex Carella (right) thanked his team, which is run by head of formula racing at the Qatar Marine Sports Federation (QMSF) Khalid bin Arhama Al-Kuwari, for his success this season.

Edging out his American teammate, Shaun Torrente, for the top spot in the overall points standings, the 28 year-old driver captured his third-straight world championship and joins fellow Italian legend Guido Cappellini as the only two drivers to win three straight seasons. Cappellini captured four straight titles from 1993 to 1996.

Knowing he had to hold off Torrente, the Florida driver who came into the event with two more points than him and two behind Finland’s Sami Selio of the Mad Croc team, Carella got a clean start and held his lane through the commitment buoy with Torrente shadowing for two-thirds of the event either two or three seconds back.

Meanwhile, French driver Philippe Chiappe of the CTIC China Team, who needed both Qatar boats to drop out of the Grand Prix to have any chance at a title, passed Torrente and eventually closed to two seconds behind Carella. Chiappe’s second-place finish gave him third overall in the championship.

“It was a rough grinding race where I couldn’t let up anywhere,” Carella said. “I’m really worn out but so happy for my crew. They believed we could win another title and I was so proud watching as they did such a professional job to get me on the water with a fast boat time after time.”

After realizing he wasn’t going to catch his teammate, Torrente said he took it easy.

“Once I knew I was going to struggle to stay with Alex having so many problems with slower traffic trying to get around them and almost losing the boat a few times, I made the decision to back down a shade and elected to take my runner-up spot in the championship,” Torrente said. “I am very proud of my crew being able to go from 11th position in the championship a year ago to runner-up this year. It’s great progress and I can’t wait for next year to fight for a title again.”

For the French driver, he did his best with what he knew would be a long road to a title at the start of the day.

“Getting past the start was huge and I knew I could stay with Shaun,” Chiappe said. “When the door opened I did my best to push Alex for a win if possible, but we just ran out of laps.”

Finland’s Sami Selio lost his slim chance of taking a third world title with technical problems on the 22nd lap and this left the door open for Team Abu Dhabi’s Ahmed Al-Hameli to finish fourth, with fellow Emirati Thani Al-Qamzi and Italian Francesco Cantando rounding off the top six.