As someone who has been around the sport—and the business—for many years, I can’t say that I was surprised when word came in that the Qatar Marine Sports Federation was disbanding our UIM F1 H2O World Championship team a couple of weeks ago. The news was somewhat disappointing though considering our team was coming off a first-place finish in the season opener in Doha, Qatar, in March (read the story).

Torrente had a great run with the Qatar Team and is ready to begin the next chapter of his racing career. Photo courtesy F1 H2O 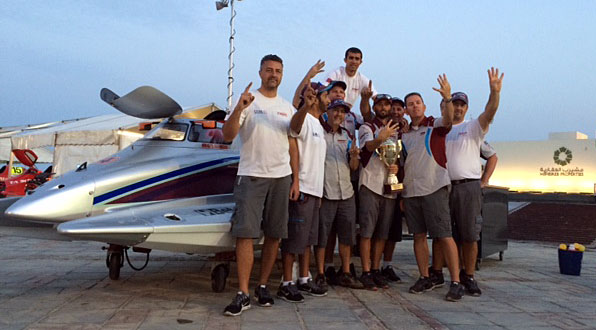 Still, with the prior resigning of Sheikh Hassan bin Jabor Al-Thani—the dedicated and passionate leader behind QMSF and its offshore, F1 and hydroplane racing programs—I wasn’t in disbelief. Furious, frustrated and even emotional are better words to describe my feelings. In fact, the past several days have taken me on quite a roller coaster of emotions.

The one saving grace is that our team couldn’t go out any better than it did. Despite all of the unrest and uncertainty surrounding the organization at the race in Doha, our team was focused and worked as hard as ever—and we dominated the entire weekend. I’m so proud of how the team responded under such adversity. I don’t want to say it was effortless, because it wasn’t. Yet, at the same time, it seemed effortless because everyone on the team did exactly what was needed (as usual) even though we didn’t have much support from the new QSWF management. However, our amazing manager Khalid Al Kuwari, who was removed from his position, remained in touch and visited with us, which was great.

Of course I feel terrible for all of my teammates, some of which have already landed jobs with other F1 H2O teams. But I feel worse for Sheikh Hassan. All he wanted was to build the greatest boat racing organization in the world and he was doing just that by bringing home multiple F1 world titles, offshore racing world championships, record-breaking top-speed runs and more. None of this is Hassan’s fault. No matter what happens, if I never race F1 again, I’ll be forever grateful for what he did by giving us a chance to race and win world championships.

Finally, I want to thank everybody who made my journey with the Qatar Team possible. Certainly I wouldn’t be able to do any of this without the support and motivation provided by my family, friends, teammates and fellow competitors. The sponsors that made my journey to the international stage possible several years ago and have continued to stand behind my teammates and me deserve a lot of the credit as well.

First and foremost I must thank my wife, Flavia, who supports me in every way imaginable, and my daughter, who is blossoming into an amazing young woman. Then there’s Sheikh Hassan and Khalid Al Kuwari—together they built the best team I’ve had the opportunity to be part of. I appreciate the faith and belief they put in me as a driver and a person.

Brendan Power, who was instrumental in bringing me to the Qatar Team, is the best engine and technical brain in F1. He always had my back and I’m proud to call him a friend no matter what team he is with. Dave Dewald, who always believes in and supports me, is the best propeller man in the world, and he is even a better friend and person.

How could I forget the amazing composites guru RJ West, who I could always trust to check the boat over and know that when it hit the water it was ready? West strapped me into just about every race I competed in with Qatar—he is someone I can confide in as well as someone who can give me feedback on driving lines and getting around the course. And Bill Rucker, where would I be with him being ornery and always yelling at me? He reminds me so much of my grandfather, it was great to race with him and to have him in our corner.

Check out the slideshow above for even more images of the successful and professional Qatar Team in action.

The Italian married couple of Alex Canzi and Stefano Luini never stopped surprising me. Their attention to detail as well as their passion for our team and sport was amazing. Canzi designed and organized all of our paddock, timing and many other things for the team. He fought harder than anyone to keep this dream alive and I love him for that. Luini is so talented in so many ways—he can do anything required from propeller work to wiring to being the strongest guy on the team that can lift a powerhead off for a quick change with his bare hands. And thanks to Charlie Schaeffer for being our utility guy and doing anything we would ask for with a smile on his face.

I owe a special thanks to Dave Holley. While he is not a member of the Qatar Team, he has always been on my team. As the CEO of Peters & May he has supported boat racing in so many ways. He helped with my start and Peters & May remained a sponsor when I went to Qatar Team. Holley is a true friend and someone who will take the sweater off his back for you—he has for me!

I’m also very disappointed that I will not get to see my Qatari brothers as often. Abdul Aziz took care of all of our small issues no matter the country we were in—he is a kind, great guy. KK was many times our comic relief as he always smiled, had fun and made great strides as a driver during the last year, winning his first F4 race in 2014. And finally my Little Brother Mohammed Al Obaidly, what can I say? We became very close very fast—I saw a lot of myself in him. We spent so much time talking about racing, driving and life. He let me yell at him because he knew I just wanted the best for him. Inshallah we will race together again one day, nothing would make me happier.

It’s easy to see that I’m saddened that my run with the Qatar Team had to end, especially the way it did, but like every class I’ve competed in before this, it’s just another chapter in my racing career.

The good news is that there is a light at the end of tunnel—there always is, right? I am currently pursuing other options and hope to be able to announce some positive news soon enough.

Commentary: Time For Answers From Qatar