Five years ago today, photographer Tom Newby died in a helicopter crash during a Powerboat magazine photo shoot near Fort Myers, Fla. For the record, he did not die “do something he loved.” He died doing his job.

Don’t get me wrong, Tom Newby liked his job. A lot. But had Newby died doing something he loved,  he would have been surfing, diving, sailing or having martinis and sushi with friends. 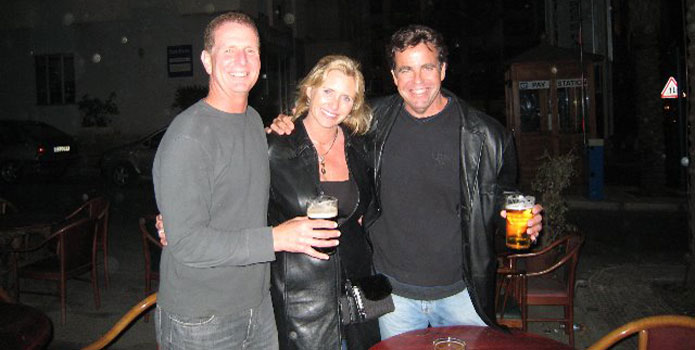 I write about Tom Newby, whom I worked with, often on the road for assignments, at Powerboat magazine for 12 years, every year on this day. I write about him because I loved him and miss him every day, and want to keep his memory alive. For he was more than an iconic high-performance powerboat photographer. He was a loveable, quirky guy who touched many lives.

Newby loved playing practical jokes on his co-workers. Among his more memorable ones was planting dead bait in a van that Jack Saranpa, a Powerboat magazine advertising sales person at the time, had to drive across Florida the following morning. Newby put some of the bait in really obvious places—the glove box was one—and not-so-obvious places, such as between the springs under the driver’s seat. His thinking was that Saranpa would find the obvious stinky bait right away and then, believing that he’d gotten it all out of the van, start driving. A few hours later, the stench would return and Saranpa would have to stop and search the van again.

Only once to my knowledge were the tables turned on Newby. About ten years ago, we were in Lima, Peru, covering some kind of crazy record powerboat run cooked up by Bob Teague of Teague Custom Marine and his Peruvian customer, Lizardo Benitez. Newby and I were allowed to fly with the rescue crew—courtesy of the Peruvian Navy—in an Augusta Bell 212 helicopter. We spent most of the morning in a hangar on the naval base in Lima, waiting for the fog to clear so Teague and Benitez could tackle the run, and in that time I got to know our pilot. His English was about as good as my Spanish, meaning horrible, but we shared a common hobby—skydiving—so we hit it off.

In fact, we hit it off so well that he agreed to lower us to the ground in the small coastal resort town of Pucasana, the end point for the record run, using the helicopter’s power winch and rescue harness. At some point during the run, I told Newby this was going to happen and he went into his classic, vigorous headshake followed by his equally classic and vigorous retort:

I told him it was going to happen. He came back with, “Get out of here.” At that point, I decided to sit back, shut up and let him stew.

At the end of the run, the pilot brought the helicopter to a hover over a breakwater in Pucasana. A crewmember handed me a rescue harness, clipped me in and I swung my legs out the open door. Newby yelled over the wind and engine noise, “What the hell are you doing?”

I yelled back, “The pilot won’t land. He doesn’t want to get his helicopter dirty.” And then I let the harness take my weight, and the crew lowered me to the ground. My laptop and Newby’s camera gear followed via the harness. Then it was Newby’s turn.

Even from 50 feet below, I could see he was not enjoying the experience. I could see he didn’t trust the harness to support him from the way he clung to the cable over his head. I could tell from the way his legs collapsed under him as he gently touched down that he was grateful to be on solid ground.

“I thought you were joking,” he screamed to me as I helped him out of his harness with the helicopter, gone moments later, still over his head. “They told me that if I didn’t want to get out I’d have to ride back to the base with them. So I got out.”

I just shrugged. “Well, we’re here,” I said. “Let’s get to the party for Bob and Lizardo and grab a beer.”

For the rest of the day and into the night, even during much of our red-eye flight back to the States, Newby eyed me suspiciously and kept saying, “I can believe we did that. I can’t believe it. That was crazy.”