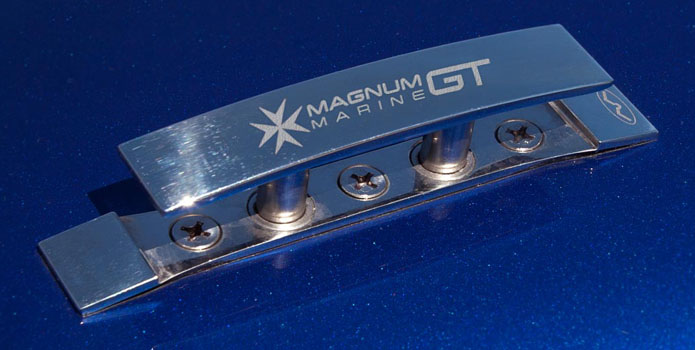 Still owned by Giovanni Theodoli, GTMM, which finished its stylish 39-foot V-bottom earlier this year, has been rebranded as Magnum Marine GT as production begins on the new Magnum Marine GT27.

After a couple of years of developing his own business and building a stunning 39-foot V-bottom (which was featured in the first issue of Speed On The Water magazine), Giovanni Theodoli, the founder of GTMM (Giovanni Theodoli Marine Manufacturing), is rebranding his company thanks to enthusiasm from his mom—Katrin Theodoli, who owns the legendary Magnum Marine.

Theodoli, who is calling the company Magnum Marine GT, recently announced that he and his business partner Scott Smith have merged with the powersports division of Magnum Marine with a focus on providing customers with the highest-quality products in the performance boat industry. Since 1976, Magnum Marine has been producing some of the most recognized boats in the world. His first line of business—complete the Magnum GT27, an updated version of the “original offshore powerboat.”

“Essentially, my mother and I came together over the concept of the new 27—she likes the idea of modernizing the classic,” Theodoli said. “The 27 is something I’ve wanted to do for a while now, but I got caught up with our first 39 and wasn’t able to put much effort into it. Once we started moving forward with the 27, my mom became more and more interested. That’s where the idea of bringing the two companies together started. She’ll handle the big stuff, and I’ll do the smaller stuff.”

Theodoli, who expects to have the first 27 complete by spring, said the boat, which actually measures 28 feet, 2 inches, has received little to no attention in recent years because the focus at Magnum Marine, which manufacturers boats between 44 and 100 feet, has been on the larger boats.

Not only is Theodoli excited to be associated with his mother and the iconic company because it brings his brand additional credibility, he also recognizes there is a built-in customer base within Magnum Marine.

“Along with boaters who will be introduced to the GT27 for the first time, I think we will also be able to sell this to clients who want tenders for their yachts and people who might be some of the original 27 customers,” said Theodoli, adding that he eventually plans to introduce a more affordable 38-foot V-bottom based off the Magnum 44 to complement the stylish GT39. “We’re so excited to be working on a ‘classic.’ It’s an incredible boat, and in my opinion it’s still probably the smoothest, driest, most-amazing performing hull in the industry.”

Theodoli confirmed that he’ll be working with Mystic Powerboats founder John Cosker for the construction of the boat, just as he did the with 39-footer. He’s also enlisted TNT Custom Marine in Miami to handle the rigging of all of his boats. A single HP700SCi engine from Mercury Racing is expected to power the first GT27.

“Essentially what we’re going to do is update the 27 using modern lamination schedules and techniques,” he said. “We’re going to add some freeboard to the boat so we can accommodate today’s larger more technically advanced power packages from Mercury Racing. We’re also giving the boat a clean, modern new deck while retaining its original hull design.

Theodoli added that Magnum GT offers rigging services to classic Magnum owners who are interested in service, restoration or a potential re-power.