Your go-to source for performance boating.
HomeIn the NewsThe OFF Factor: Racers Are Racers—Always

The OFF Factor: Racers Are Racers—Always

The OFF Factor: Racers Are Racers—Always 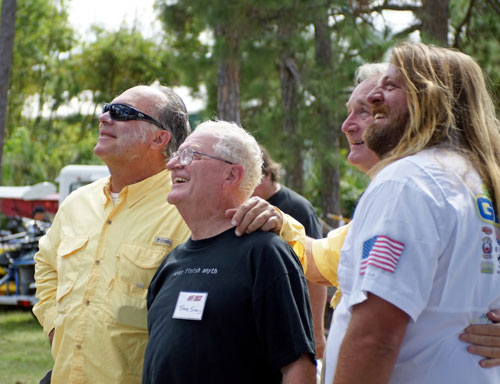 For the past three years, powerboat racing icons, relics, fans and genuine racing heroes have gathered each October in and around Jupiter, Fla. The resulting melee of parties, race team shop tours, parties, go-fast pleasure boat and race boat fly-bys, parties, story-telling, parties, laughter, parties, memorabilia auctions, parties, and camaraderie of epic proportions have resulted in an event that defies description. It also represents the best opportunity to meet and understand the guys who built the sport we all love.

Welcome to Old Farts Forever, 2011. (Did I mention that parties are a key component of this yearly event?)

Where else can you meet people who tested, designed, raced and conceived not only the boats and equipment that support the sport today, but also the very backbone of racing? Where else do you find people like Alan Brown, who worked side by side with Don Aronow and Clive Curtis to bring Donzi, Magnum, Cigarette, and Cougar to the Offshore racecourse?

And where else can you find Miss Geico teammates Marc Granet and Scotty Begovich sitting and soaking up knowledge from Mike Peters, George Linder, Harry Schoell, and the Switzer brothers?

Where do you see legendary racers such as Jackie Wilson, who raced a Cosworth Formula 1 stern-drive against the fastest factory team outboards and won; multi time World Outboard Champion Ken Kitson; Ben Robertson, Formula One tunnel and Offshore champion; Reggie Fountain, who won more than 100 races; and Bill Seebold, who won more than1,000 races, sitting together and swapping lies?

Where else can you see vintage race boats like Molinaris, Allisons, Switzer Wings, Inboard and Outboard hydros, speed skiffs and retro Offshore hulls, mixing it up with present day Champ and Drag boats both in static display, and in high speed flybys? All of this is just a tiny part of the bigger OFF picture.

Raceboats of all vintages and materials were displayed at this year’s event.

Conceived four years ago by boat racing veterans Steve Sirois, Jim Hauser, and Cadillac McDaniels at Alan Brown’s old-timers party honoring the late Davey Gilmore, in Fort Lauderdale, OFF has grown quickly and steadily. The genesis of the annual event was their realization that no true vehicle existed to bring together the guys who built all the forms of racing we now enjoy. That many of us are getting older, and too many have already passed the final finish line, gave the trio of friends an even greater sense of urgency to get something started.

So they teamed up to provide local venues, restaurants, marinas, a town square, The Geico  and Wilson race shops, and Cadillac’s amazing “Byblos” (named for a resort in France) as settings for a three-day festival of get-togethers that drew some of the most famous and successful personalities in boat racing history. Attendees from around the country Jerry Gilbreath, Tom Akoury, Bob Saccenti, Phil and Michael Fillapone, Bert Serra, Jim Hunt, Johnny Bakos, Dick Clark, Errol Lanier, Bobby Sheer, John Henry Faulk, Vida Sirois, Charlie Wolfe, Dave Craig, Butch Stokes, John Stenback, Gordon Houser, Gus Anastasi, Kurt Brayer, Adib Mastry, Tom Stickle and dozens of others who showed up in a show of solidarity, respect, and brotherhood that has to be on any true boat racer’s bucket list.

Yet another white-hot clasic, this one an Allison.

The single most audible characteristic of OFF is laughter, the kind that develops when guys have raced nose to nose against each other over decades and continue that air of competition with seemingly endless, hard-nosed but good-humored ribbing.

At the center of this fracas and probably the single most amazing prince at the ball is the indescribable wit and genius known as Odell Lewis.

For those who weren’t around during his days of triumph, Odell was Carl Kiekhaefer’s original No. 1 gun in racing.  Half Italian and half Native American, this is a guy who could test all week at Lake X, wrestle alligators as a sideline and dominate on the racecourse each weekend. He was equally at home in Powercats, Switzer Wings, Bertrams, and Magnums while racing in closed courses, the Gold Coast marathons, and major Offshore venues like the Bahamas 500. He rigged, raced, developed hardware, and partied up a storm of mythic proportions.

Lewis also is the guy who gave Don Aronow his toughest battles and won as many times as he lost.

But all of that doesn’t begin to describe the size of Odell’s heart and good nature. Every time you hear a roar at OFF, you’ll more than likely find Mr. Lewis at its center.

Undoubtedly the highlight of each event is the memorial to those racers who have died. This year it was accompanied by a tribute to War veterans and donations were accepted for Honor Guard, the charity that brings aging soldiers to Washington D.C. for a visit to the war memorials. As he does every year Charlie Wolfe performed a low-level flyby in his stunt plane just as the final notes of Taps are played and the names of racers past are whispered from our lips. Something magical always happens as this ceremony finishes and generally there isn’t a dry eye in the group. This year even God showed up, for as Charlie’s plane gradually disappeared over the horizon after his dizzying aerobatics-magically- a bald eagle appeared and did slow circles over all of us.

Somewhere I’m sure, Billy Don Pruett, Bill Sirois, Mike Poppa, Dick Fullam, Marc Lavin, Al Copeland , Tom Gentry, Jim Caldwell, and all of the others in the OFF Brotherhood who were taken from us too soon were circling above us as well.

Pilot Charlie Wolfe soars with the angels of powerboat racing.