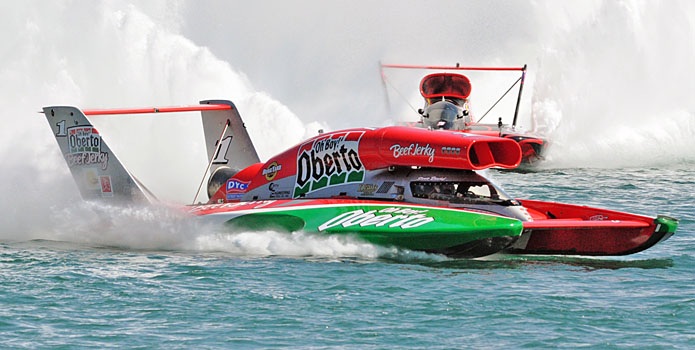 Steve David will be driving the Oh Boy! Oberto hydroplane for the last time this weekend as the legendary driver has announced his retirement from the sport after a quarter century at the wheel. Photo courtesy Miss Madison Racing team

In the sport of hydroplane racing there have been quite a few iconic drivers. Bill Muncey, Chip Hanauer and Dave Villwock come to mind right away. Also in that discussion, mainly because of his accomplishments but also because of his passion for the sport and charismatic personality, is the legendary Steve David.

In an official announcement from the U-1 Oh Boy! Oberto/Miss Madison Racing team this morning, the sport’s winningest active driver has announced his race at San Diego Bayfair this weekend will be his last in 25 years of racing Unlimited hydroplanes.

Before closing his record book in boat racing, David, who has accumulated 18 wins, six driver’s championships and four national championships, will have to use his decades of racing knowledge to defend both the Bayfair Cup and the H1 Unlimited National Championship this weekend on San Diego’s Mission Bay.

“This weekend you’ll see 100 percent, plus one,” said David, a past American Power Boat Association (APBA) President from 1996-98 and a six-time inductee into the APBA’s Hall of Champions. “It’s said the difference between boiling water and just hot water is one degree. My team is giving me that extra degree of energy this weekend and we’ll be putting it all on the line for my final race.”

The Oh Boy! Oberto driver has a slim 43-point lead over Graham Trucking driver Jimmy Shane heading into the final race of the 2013 season. With the top qualifier receiving 100 points Friday and the winner of Saturday’s and Sunday’s preliminary heats getting 400 points for first place, David will have no time to think about his future summers sipping rum and cokes on the back of his recreational pleasure boat in the Bahamas.

“It’s fitting that my last race will be on the Bill Muncey Memorial Course on Mission Bay,” David said. “Bill was a tough competitor, and one of the finest ambassadors for our sport. The national championship will be determined on his course with us defending the title against Jimmy Shane. I have literally known Jimmy since he was born.”

David, who turns 60 in January, had been contemplating his retirement for some time. He had hoped to win one race on the circuit that he doesn’t have in his trophy cabinet—the Detroit Gold Cup. But after a heartbreaking loss this year—he’s battled for the Gold Cup 22 times and finished second seven times—David felt maybe the 109-year-old trophy just didn’t belong in his cabinet.

“I have dreamed for years of winning the Gold Cup, but it wasn’t meant to be,” David said. “I believe that God didn’t give me what I wanted, but rather what I needed. It is fully acceptable to me.

“What I needed from boat racing was to have met the thousands of fans and friends that have supported me through thick and thin, wins and losses, and some painful crashes,” he continued. “Everyone I have met in my 44 years of boat racing is part of my record book and in my trophy cabinet. To me that is better than the Gold Cup.”

When told of David’s retirement, Jerry Jensen a fan and follower since 1988 from Portland, Ore. said, “It seems like just yesterday I met Steve. He had just suffered a bad fire in the open cockpit Pocket Savers Plus on Lake Mead (Nev.). His face wrapped in an ice-packed towel from the burns, still in pain, there he was, in the pits, meeting and greeting his fans. That trademark smile poking out from the towel. After that I have been his fan ever since. My kids and I will miss him and so will the sport.”

Steve Brandon, a fan from Detroit, said, “Steve is a guy that has so much experience he knows exactly where that fine line is when racing. He always brought the boat back in one piece and put it back on the trailer. Very seldom did you see him on the back of a tow line, a tribute to both Steve and his crew.”

When the roostertails settle on Mission Bay, David, a native of Chillicothe, Ohio, will return to Florida and continue to build his real estate holding company, Florida Professional Family of Companies, currently one of the 100 largest independent real estate holdings in the USA. He and wife, Sabrina, will be dividing their time between their homes in Lighthouse Point, Fla., and Ocean Reef, Fla., when not snorkeling their way through the Bahamas on board their recreational boat Grateful.

Still, David won’t be saying goodbye to the sport forever. “While retiring from driving, my passion for improving boat racing and the fan experience will not cease,” he said.

As for the Miss Madison Racing team, it will begin an extensive off-season search for a driver to replace David, who has driven for the Madison, Ind., community-owned team for 13 years.

“The entire Madison racing experience has been a magic carpet ride,” David explained. “From a back marker to middle of the pack to making finals and now a multiple-time national championship team, it really is the stuff of folklore. The team has always given me 100 percent and I’ve tried to reciprocate.”

Team manager Charlie Grooms said finding a replacement for David will be no easy task.

“Steve has been such an ambassador for the city of Madison, Ind., our sponsor Oh Boy! Oberto and the sport of hydroplane racing that it will take years to replace him,” Grooms said. “We are all saddened that he has chosen to hang his helmet up but we are extremely grateful for his leadership in our organization. He has brought the Miss Madison organization from just a participant to a multi-national champion winner and we look forward to his leadership and support in the future.”

To begin the task, the team will select a new driver from only 17 in the world with Unlimited driving experience.

The Highs and Lows From 2012: Steve David

Checking in with Jim Hering of Hering Propellers