As usual, it appeared that everyone on hand for the Texas Outlaw Challenge had an amazingly memorable—and busy—time at the 11th annual event hosted on Clear Lake and the surrounding Lone Star State communities that always welcome the performance boaters as well as cars, motorcycles and, new for this year, raceboats. 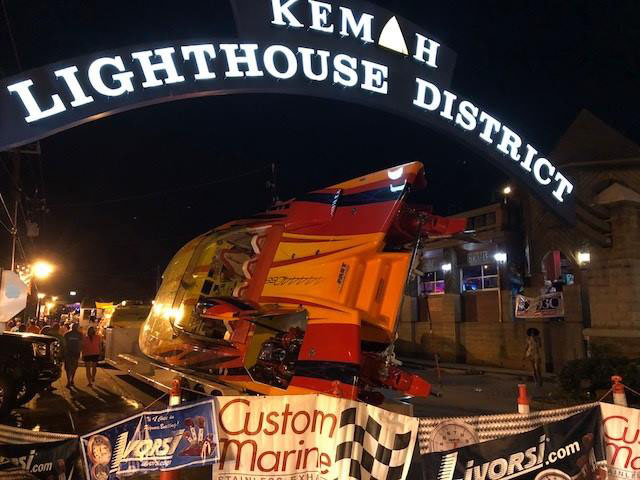 The organizers as well as the participants were thrilled with the overall fun factor, the level of generosity in response to Hurricane Harvey relief efforts and the variety of featured events taking place each day. Once again, Thursday’s Stampede Street Party in downtown Kemah (right, click to enlarge) was a winner thanks to the amazing catamarans, center consoles and V-bottoms that were on display.

Speaking of winners, the event’s Shoot-Out on Friday brought out several fast, crowd-pleasing boats, including an all-new offshore raceboat based out of Texas—the Huski Chocolate 52-foot MTI catamaran powered by twin Mercury Racing 1750 engines. Driven by Tim Trahan and throttled by team manager Bruce Bullock, the boat, which made its debut at a special event on Wednesday evening, clocked a top speed of 164 mph on the three-quarter-mile course.

Of course later that afternoon, the poker run officially kicked off with the party featuring DJ Carter Cruise and tons of food and drink at Kenny Armstrong’s house. Armstrong, who owns the 48-foot Phantom MTI, had a great time running his boat and soaking in the pleasant weather that graced both days of the poker run this year.

Tony Chiaramonte and Jeff Johnston of DCB said they had a lot of fun running around and giving rides in their M33R demo model powered by twin Mercury Racing Verado 400R engines. An unplanned demo led to a photo Johnston shared (see slideshow below) from when they were boarded by the United States Coast Guard, which was doing random stops throughout the event to check for proper equipment, registration, etc.

Luckily—along with everything being bigger in Texas—Johnston said even the water patrol is friendlier in Texas.

Check out the slideshow above for more images from the Texas Outlaw Challenge.

From DCBs (California’s Lawrence Coehlo, who was featured in the latest Speed On The Water digital magazine, was on hand again in his 28-foot V-bottom) to Nor-Techs (Jeff Campbell showed off his incredible 45-foot center console from Nor-Tech Hi-Performance Boats) to Outerlimits (Eddie Willrich hit 110 mph in his Outerlimits Offshore Powerboats V-bottom on the three-quarter-mile course on Friday), boats of all shapes and sizes were represented.

Heck, even the all-new Adrenaline Powerboats 47 ZRX owned by Chris Walker of SuperTruck was on hand for the 11th annual affair. One of Walker’s previous boats—the first C4400 catamaran from Mystic Powerboats, Agent Provocateur—also participated in the run.

Throughout the weekend there were a lot of awesome posts on Facebook, but one of the best updates came from longtime local event participant and Skater Powerboats owner Paul Shouse.

“Another Texas Outlaw Challenge in the books,” Shouse said after celebrating his birthday during the poker run. “If anyone happens to find my liver floating around Clear Lake along with my lost Amex card, you can keep them—they are both shot!”

Special recognition is needed for the Texas Outlaw Challenge social media crew for keeping the people who couldn’t make it to the event informed of the fun going on in town.

And congratulations to those involved with hosting the first race on Clear Lake in decades. The top three finishers in the Champ class of the International Outboard Grand Prix’s inaugural Texas Outlaw Challenge Grand Prix, which was viewed by thousands of spectators, were Greg Foster, Spencer Love and Tammy Wolf, respectively. Chris Fairchild of Illinois was running solid in second pace until he stuffed the boat in turn 5 on lap 11, ending a shortened race. In the Champ Sport class, three Texans—Wesley Cheatham, Tracy Hawkins and David Johnigan—took first, second and third place, respectively.