Your go-to source for performance boating.
HomeIn the NewsWarpaint, Other Superboats Excited About New Class

A lot of eyes were on the new Superboat class, which combined the former Super Cat, Superboat 750 and Superboat 850 classes for the first time at the Super Boat International (SBI) Key West World Championships in early November. And the consensus among the race teams was that the class is on the right track heading into the 2013 season. 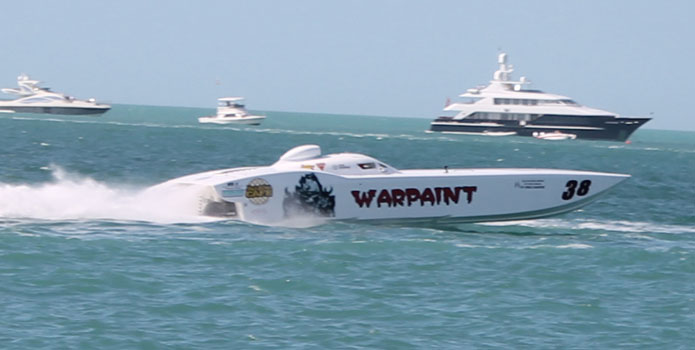 With seven boats competing in the class, including Fastboats.com, J.D. Byrider, Maritimo, Stihl, Team CRC, WHM Motorsports and the new Team Warpaint, the racing was competitive and exciting for the spectators. And while the specs were outlined prior to the championships, the teams met throughout the week and are hoping to truly define the class specs by the end of the year so they can move forward in what they believe will be SBI’s premier class in 2013.

According to Team Warpaint owner and driver Bob Vesper, the event was somewhat of a fact-finding mission for the new Superboat class, as well as for his own team. And despite finishing sixth overall, Vesper was excited about the new team dynamic with renowned throttleman Billy Moore and everything he learned about the team’s new Marine Technology Inc. catamaran.

“Our team always wants to win, but we knew that probably wasn’t realistic this year,” said Vesper, who was pleased with his crew’s performance and the improvements the team made from the first race of the week on Wednesday to Sunday’s double-points finale. “We came here to learn the boat and we did just that, improving each time we put her in the water. I’m absolutely impressed with what she’ll do. 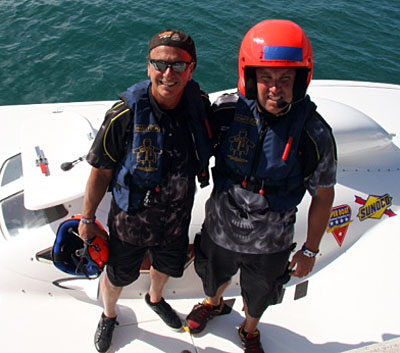 “We have a lot to do between now and Cocoa Beach (next year’s SBI opener on Florida’s East Coast),” continued Vesper, who is from Somers Point, N.J. “We got the opportunity to run in all types of conditions this week—flat, choppy and big water, which allowed us to gather a lot of data.”

Team Warpaint, which stuffed its old boat at the 2011 world championships and returned this year to major fanfare, finished sixth overall with the Australian-based Maritimo team finishing first ahead of Stihl and J.D. Byrider. Despite suffering a power steering failure on Wednesday, the team tested the boat and its Sterling Performance engines repeatedly, and was able to finish strong in the second race on Friday and in Sunday’s finale.

“I think we made a lot of progress being that it was our first time in the boat, and our first time racing together,” said Moore, the service manager at Pro Marine Performance Center in St. Petersburg, Fla., who also works with Statement Marine on its high-performance lineup of boats. “The team is made up of genuine good people. I really enjoy the environment, the racing and the work that it takes to go racing.”

Commentary: Will the Superboat Class Be Reborn