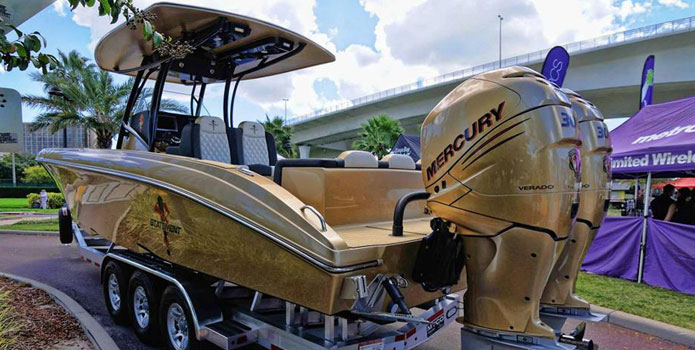 Though it was displayed at the SBI Nationals, Szolack won’t see his new Statement in person for the first time until he arrives in Key West. Photo courtesy/copyright Jay Nichols/Naples Image.

Although the model was on display in the dry pits at the SBI National Championships in Clearwater, Fla., in late September, Szolack will see it for the first time in person when he arrives in Key West. He ordered it specifically for day trips and simply getting around the ways of Key West this week.

“I had it built to use in Key West because I have a lot of friends who are going to be down there,” said Szloack, who lives in Harrison Township, Mich. “We’re going tool around in it, maybe go to the islands in the area. Honestly, I really don’t even know what’s down there.

“I’m going to sell it after Key West,” he added.

When the 35-foot Statement goes on sale, Szolack will have three boats on consignment at Pier 57 Marine—his 50-foot Mystic and 38-foot Skater catamarans currently are being offered by the Gurnee, Ill., new and pre-owned high-performance powerboat dealership and service center.