With its start less than two hours away, the Superboat-class catamaran fleet at the Super Boat International National Championships will have five boats in the field when they take to the Gulf Coast waters off Clearwater Beach, Fla., this afternoon. WHM Motorsports comes into today’s event with a regular season points lead of over Stihl, which means that WHM can finish in second place today and still take the National Championship in the class.

But there is at least one potential “spoiler”—beyond the constant potential spoiler known as mechanical failure—in the field, the 42-foot Spirit of Qatar 20 cat. If the Qatar-backed cat, or any other boat in the Superboat class, finishes between Stihl and WHM, Stihl will take the National title. 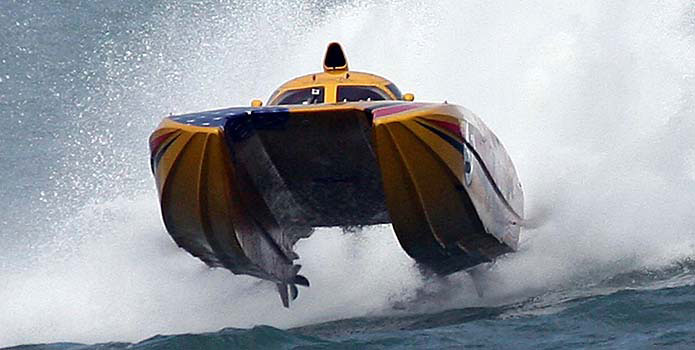 WHM Motorsports is positioned to take the National title at the SBI Nationals in Clearwater, Fla., today, but the deal is anything but done. Photo courtesy/copyright Jeff Gerrardi/FreezeFramevideo.net

“We were out there with Spirit of Qatar during practice yesterday and we could barely keep up with them—they were fast,” said Tony Marcantonio, the owner and driver of the J.D. Byrider cat. “It looks like today will be a flat-water race, which favors Stihl and the Qatar. Billy (Mauff, the owner and throttleman of WHM Motorsports) doesn’t really have a fast flat-water boat. We don’t, either. So I think its anybody’s race.”

Marcantonio said he expects the Superboat-class field to have eight entries at the SBI Key West Offshore World Championships in early November. In addition to the five boats—WHM, Stihl, J.D. Byrider, Spirit of Qatar 20 and Warpaint—that competed in various races during the 2013 season, Fastboats.com and Team CRC reportedly will head to Key West. A new entry to the Superboat class, the Marine Technology, Inc., Broadco Cat 5 boat that began competing on the Offshore Powerboat Association circuit this season, reportedly is repowering with 750-hp Scorpion Racing engines and will be ready to go in time for Key West.

“Frank (McComas, the founder and owner of Scorpion Racing) is building the engines and TNT Custom Marine is doing the rigging,” said Marcantonio. “At the Worlds and then in 2014, Broadco will run in the Superboat class.

“I think this class is really moving forward,” he added. “When was the last time we had eight Superboats running in this class?”

Editor’s Note: While the official results are not in yet, I did not take into account that the SBI Nationals were a “double points” race. So while Stihl and WHM finished first and second in the race, Stihl reportedly took the National title in the Superboat class. All apologies for any confusion my reporting may have caused.

Image of the Week, Part IV: Last Light in Clearwater