Your go-to source for performance boating.
HomeIn the NewsSuperboat Class Could See Largest Fleet In More Than 10 Years

With nine teams reportedly planning to compete in Superboat class during next week’s Super Boat International Offshore World Championships in Key West, Fla., the class could see its largest fleet since the days of APBA Offshore LLC in the early 2000s. If current plans hold, Broadco Property Restoration, CRC, Fastboats.com/BurgerFi, J.D. Byrider, Rick’s Collision, Spirit of Qatar, Stihl, Warpaint and WHM Motorsports will be in the field when the first race kicks off on Wednesday, Nov. 7 at 2 p.m. (EST) 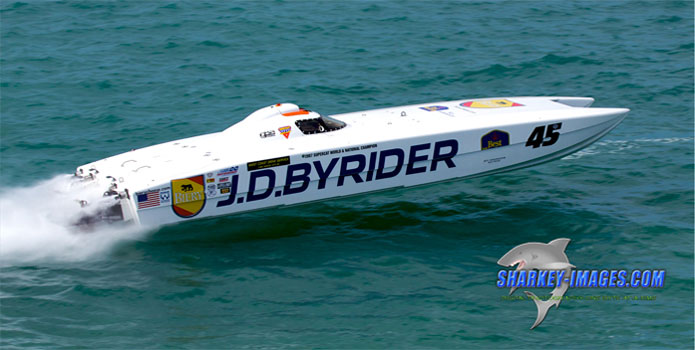 “In 2001, I think there were 12 Super Cats in Key,” said Tony Marcantonio, the driver and owner of the J.D. Byrider Skater catamaran. “Change is always tough, but I think it’s going in the right direction.”

Called Super Cat under APBA Offshore, the class began a steady decline with the demise of the organization, the rise of a new organization that eventually fell prey to internal struggles and most significantly—a few years later—the flagging United States economy. (Of the original Super Cat race teams from the early 2000s, only multi-time world champion WHM Motorsports owned by Billy Mauff remains.) Shortly before the SBI Key West Worlds in 2012, engine and hull specifications for the class were retooled, and the dwindling Superboat Light class—cats with twin spec Mercury Racing 525 EFI engines—was consolidated into the Superboat class.

During the regular SBI season in the 2013, the Superboat class had strongest boat count with an average of 4.5 boats per race.

The longest standing team in the class, Billy Mauff’s WHM Motorsports is one of the favorites in the Superboat class heading into Key West. Photo courtesy/copyright Jeff Gerardi/FreezeFramevideo.net.

“I think the success of Superboat is a combination of the rule changes and class consolidation,” said Marcantonio, who recently took his 38-footer to Real Fast Marine in Washington, N.C., to improve its smooth-water performance. “The Cat Light class was a great class, but it was dying.

“There are still a lot of good boats and a lot of good teams,” he continued. “I think that everyone is going down to Key West with fresh power, and in the last forecast I saw the winds were predicted to be 19 to 20 mph from the east. I’m not sure what that means, but I know the races are going to be exciting.”

A Fresh Start for the Parker Enduro