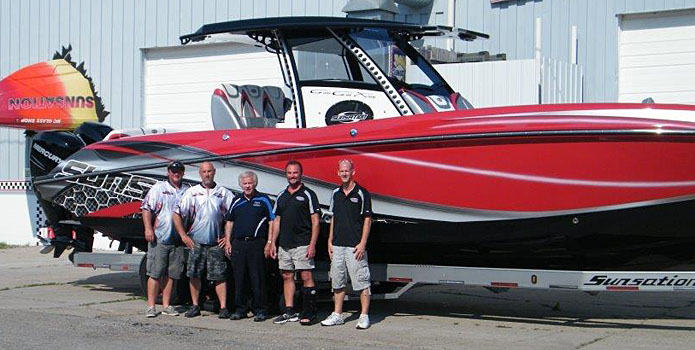 Sunsation owners (from left) Jared Morris, Joe Schaldenbrand and Wayne Schaldenbrand, and lead engineer Kyle Miller got the chance to discuss the rebound of the industry in both sport boats and center consoles with Reggie Fountain (center).

For Joe Schaldenbrand, one of the owners of Sunsation Powerboats in Algonac, Mich., the opportunity to host Reggie Fountain and give the legendary boat builder a tour of the facility was “an honor.” And then to get Fountain’s thumbs-up feedback on the company’s new 34 Center Cabin Xtreme (CCX), Schaldenbrand called that “the ultimate compliment.”

During a visit on Monday, Fountain, who founded Fountain Powerboats in 1978, told the owners of the company—Joe, his brother Wayne and new partner Jared Morris—that he was impressed with the speeds they’re getting out of the 34-foot center console.

When Wayne asked the 73-year-old Fountain if he wanted to take a ride in the 34-foot center console, Fountain instantly replied “well of course.” After touring the manufacturing plant and lamination shop—Fountain praised many aspects of Sunsation’s production process and also shared some ideas—the group took a ride in the 34 CCX, which is powered by triple Mercury 300 Verado engines.

Once back at the dock, Fountain said he was impressed with the boat’s speed, its handling and the overall craftsmanship. And after seeing the spacious cabin in the 34-footer, Fountain reportedly said, “This is exactly how I would build a center console in today’s market.”

“There was nothing he didn’t like about the boat,” Joe said. “And for him to be impressed with the speed and handling of the boat, that’s the ultimate compliment coming from a guy who spent his entire career making things go fast.”