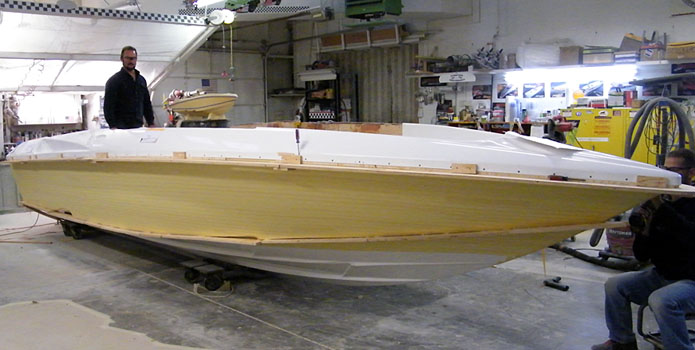 Sunsation’s Wayne Schaldenbrand examines the tooling for the company’s new 29 CCX, which is expected to be ready in time for the Miami International Boat Show.

On the drawing board since before the company unveiled its first center console earlier this year—the 34 CCX—Sunsation Boats recently started tooling up its second center-console offering, the 29 CCX. Targeted to hit a lower price point yet still retain the appealing features of its 34-foot sibling such as the stylish T-top, oversized cabin in the console and sleek lines, the new 28-foot, 8-inch model will be available in a single- or twin-engine configuration.

“We’ve had a lot of customer interest for a boat a little smaller and more affordable than the 34 CCX,” said company founder Wayne Schaldenbrand. “The bottom of the 29 CCX is based on our sportboat hull. We’re stretching it a little at the back to give it that integrated transom. We’re creating all-new tooling for the 29 and it will have an integrated liner in the cabin just like the 34.

“Think of it as a smaller version of the 34 CCX, just shrunk down a little,” he continued. “We believe a lot of our existing clientele will be interested in the boat. We’re going to make a gallant effort to keep it affordable without sacrificing any quality.”

Schaldenbrand said the boat, which the company will be working on around the clock with hopes of displaying it at the Miami International Boat Show in February, features an 8-foot, 1-inch beam and specially designed bulkheads to accommodate for the open span where the cabin comes into play below the deck.

Base power for the 29 CCX is expected to be twin Mercury Verado 150 outboards, although Schaldenbrand said the boat will be set up to handle a single engine, such as a 300-hp Verado.

Sunsation’s Addition to the Family