Your go-to source for performance boating.
HomeIn the NewsSunny Isles Beach Offshore Challenge: On Site for the Weekend 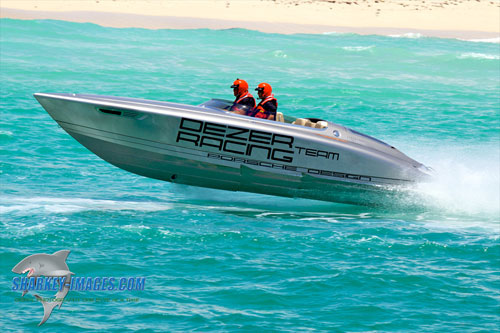 The Dezer team got lost it its 28-foot V-bottom, but made it back safely.

Every event has a personality, most often a product of its location and promoters. This weekend’s Sunny Isles Beach Offshore Challenge is, well, sunny, and not just because it happens in North Miami in June. Event founders Brad Schoenwald and Larry Goldman put their hearts, souls and wallets into it. They’ve created a festival with a family atmosphere and endless entertainment on and off the water.

New renovated and expanded, Gulfstream Park Racetrack and Casino plays host, and it’s a fine one, for the weekend’s off-water activities. Centrally located in Hallendale, nearby the wet pits in Haulover Park, the Race Village is paved, clean and loaded with eye-candy—South Florida women, exotic cars and motorcycles and (oh yeah) an excellent array of race boats. It’s a motorhead’s delight.

On the water, the event is a trifecta of high-performance powerboating that offers something for everyone—yesterday’s Miami-Bimini Challenge endurance run, today’s Florida Powerboat Club Poker Run and tomorrow’s Offshore Powerboat Association race that has attracted an impressive fleet. Parties in the Gulfstream courtyard, rock and roll, food and drink. What more could race fans ask?

When The Going Gets Tough, The Tough Head For Bimini

Friday’s southeast 11-knot winds seemed to scare of a few would-be competitors who had planned to do the 120-mile roundtrip Miami-Bimini run. Though disappointing for the promoters, that wasn’t too hard to understand as the wide-open waterway is known for the variable conditions of the Gulf Stream, wakes from ships and even, on occasion, a surfacing submarine.

In the true offshore racing fashion, the start was delayed because of last-minute mechanical issues, setbacks at the crane and even a wayward engine hatch. The boats filed out at about 12:30 p.m.

The fleet consisted of the 28-foot Porsche V-bottom aptly named fearless and labeled Dezer Racing for Trump partner and hotelier Dezer Development, the sponsor of the race. Powerboating veteran Jim Lee and his teammate Tyson Garvin headed out next in a 28-foot Skater with outboard power, followed by Bill Glueck and Brett Furshman in the 40-foot Fountain, Twisted Metal.

Next out was Bob Teague and his son, John, in the Team Amsoil Skater race boat, followed by Burning Racing, a 42-foot MTI cat and Lamborghini of Miami  (the former Bud Select boat) with event promoter Larry Goldman piloting. About 15 minutes later, Randy Sweers and Daniel Zampaloni took off in the Loriblu Racing cat. Topless Racing, a boat that entered but did not start, buzzed up and down the beach while crew on the beach waited—and waited.

A little more than an hour later, a silver bullet appeared on the horizon and Teague team arrived first in 1:07:15—a great pre-Fathers Day gift for Bob and John, who chalked up his first offshore endurance race victory.

Despite its late start Loriblu was just 2 minutes and 59 seconds behind Amsoil and Twisted Metal, a former top-speed Miami-Bimini title-holder, buzzed the beach at 1:27:09. Goldman was forced to turnaround early in the event because of falling oil pressure in one Lamborghini of Miami’s engines.

Burning Racing burned out, the Fearless team got lost but stayed brave and found their way home and Lee and Garvin reportedly limped into Bimini on one engine. (A quick flight got them back to Miami.) It was all in day’s powerboating, endurance-run style.

“We were over-propped,” said Glueck, disappointed but exhilarated. “It was big out there—weird, not like the normal Gulf.”

Sweers agreed. “There were 5- to 8-foot rolling swells and wind changes, not what I expected.”

For the Teagues, the victory was sweet.

Team Amsoil finished first with a father-and-son duo in the cockpit.

“There are not too many fathers and sons who get to do this,” said John, nodding toward his grinning dad.

“It was a lot bumpier than we expected,” said Bob. “And with the increased wind closer to the beach, it got kind of steep.”

Next up? Today’s poker run and tomorrow’s offshore race. The Sunny Isles Offshore Challenge Weekend is a long way from over. Stay tuned.

Buzzing the beach at Sunny Isles.