The former 36-foot Skater catamaran that ran as the Bud Light offshore race boat and was eventually converted to a pleasure boat has been purchased by Mike D’Anniballe, the owner of Sterling Performance Engines in Milford, Mich. The cat, which arrived at TNT Custom Marine in Miami this morning, currently is powered by twin 1,500-hp supercharged Sterling engines that will be converted to turbocharged 1,700-hp Sterling engines. 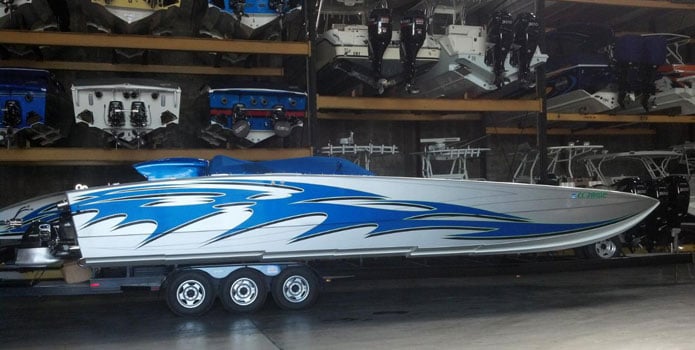 “The 1700 turbo is based on the same (557-cubic-inch) platform as the 1500, so we will use that as our base, remove what we need to and replace it with our turbocharger configuration,” said D’Anniballe. “We will build the engines, but all of the rigging will be done at TNT.”

The first set of Sterling 1700 turbocharged engines also went into a Skater, but that cat has not seen “the kind of usage and exposure for the 1700s that we had hoped for,” said D’Anniballe. 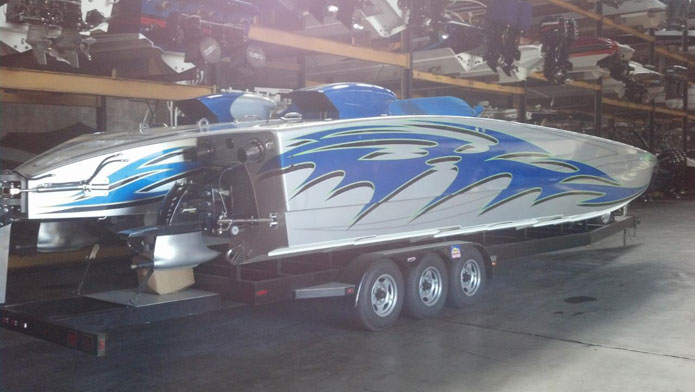 The cat’s original and unusual propulsion-and-steering setup includes a rudder and two No. 6 drives.

“We’re hoping to have the boat done in time for Desert Storm next spring,” added D’Anniballe. “That’s a pretty tight deadline, but we’re going to do everything we can to make it.”

Editor’s Note: Speedonthewater.com will follow the Sterling project boat story as it develops.

Testing to Resume on Sterling 1700-Powered Skater 288 in January

Sterling 1700-Powered Skater Back on the Water this Week

Sterling 1700s Getting Dressed for Final Dyno Testing and Shipping