Less than an hour ago, John Tomlinson of TNT Custom Marine in Miami completed his first sea trial of a 36-foot Skater catamaran powered by the recently reconfigured pair of 1,700-hp turbocharged 557-cubic-inch engines from Sterling Performance. The boat was set up with 41-inch-pitch Hering five-blade propellers on its Mercury Racing No. 6 drives with 1.24:1 gear ratios. 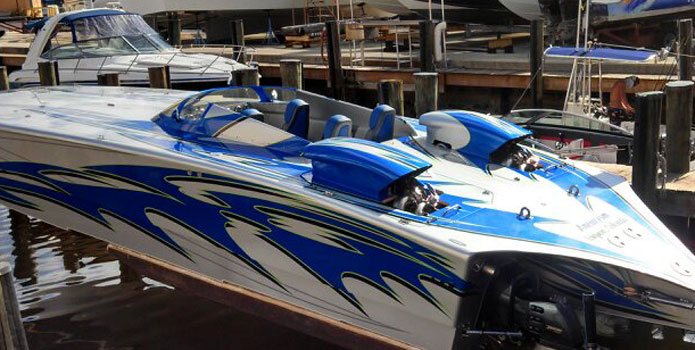 Fresh out of the water from runs that ranged from 170 mph to 190 mph, the Sterling 1700-powered Skater cat impressed test driver Tomlinson.

“It was a little tough to get on plane with the big props and gears, but right out of the box it did well,” said Tomlinson during a telephone interview this afternoon. “I took it up to 7,200 rpm, and the boat was still accelerating as I was coming off the throttles because I didn’t have a lot of space, there was a bit of wind and chop and I was out there alone. I made a couple warm-up passes, then four real-quick passes of about one mile, and I ran it from 170 mph to 190 mph during those passes. It would have kept on going—it will easily go over 200 mph—but as I said I was by myself and there was some wind and chop. And it’s a small boat.

Tomlinson said that the crew at TNT will make a few adjustments before sending the 36-footer back to Mike D’Anniballe, the owner of Milford, Mich., engine company as well as the project catamaran for the 1700s, for final setup and calibration adjustments.

“At 1,500 to 1,700 rpm, you have to wait and wait for the boat to come over on plane, but it eventually does,” Tomlinson explained. “They’re turbocharged engines, so right now you have to wait for them to make power. They can make coming on plane easier, but those are adjustments they will make at Sterling.”

The 36-foot catamaran heads back to Sterling next week for final setup and engine calibration in preparation for its planned appearance at the Lake of the Ozarks Shootout.

In a prior speedonthewater.com article, Tomlinson said he and D’Anniballe would run the boat in the upcoming Lake of the Ozarks Shootout if the first sea trial went well.

“Based on today’s performance, I think we’re going to be there,” he said.