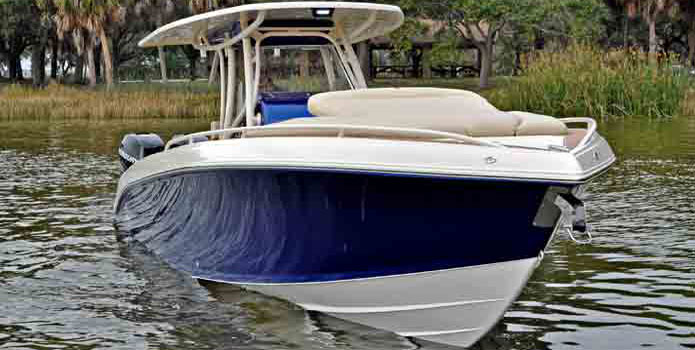 The hull and deck of Statement Marine’s first 368 SUV Crossover center console with four outboard engines is slated to be finished early next week. The 36-footer will be powered by quad 300-hp Mercury Verado engines. Estimated top for the stepped-hull V-bottom, which is going to Bob Christie of West Windsor, N.J., is 80 mph.

“The boat will be in the Statement booth during the 2013 Miami International Boat Show,” said Christie, who also owns the well-known 44-foot-long Speed Racer Marine Technology, Inc., catamaran. “The weekend after the show, we’re going to take it on the Islamorada Poker Run.

“I was very impressed with the ride—at the St. Petersburg poker run in March, I rode in one with triple 350 Verados that was a fully loaded with people, and the ride was perfect,” he continued. “I’m impressed with the finish work, the level of customization and the time they take to do everything right.”

The boat will be laid out with six bolsters—two of them ahead of the center console.