Your go-to source for performance boating.
HomeIn the NewsStatement Bringing the Center Console Experience to Miami

Statement Marine is taking a little different approach heading into this year’s Miami International Boat Show (Feb. 13-17). Rather than set up a display inside the convention center as it has the past few years, the St. Petersburg, Fla., company will be showcasing four boats—all center console models—at the in-water portion of the show. 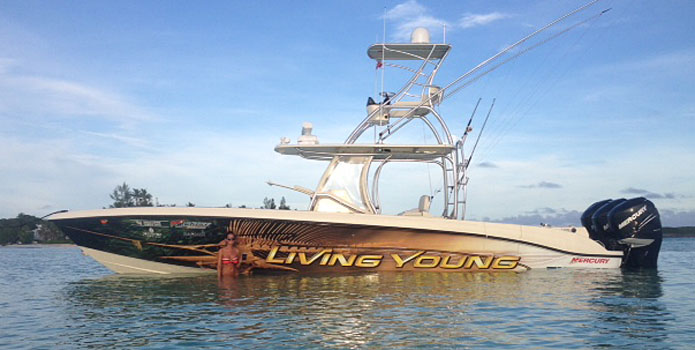 Living Young, a new 38-foot center console from Statement Marine, will be in the water at the Miami International Boat Show.

According to Statement’s Craig Barrie, the company will be located in the Mercury section of the docks at Sea Isle Marina with three 38-foot models and a 35-footer.

The 350 SUV features a pair of Mercury 300 Verado engines and one of the 380 models is powered by triple 300 Verados. The Living Young fishboat featuring a unique tower above the T-top and a trifecta of Verado outboards is one of two other 38-foot center consoles set to be on display. A Cummins diesel-powered 380 with joystick docking is the other.

Barrie said Statement’s goal is to be able to take potential customers for demo rides and allow them to really touch and feel the boats on the water.

“Inside, you can’t do any of that,” Barrie said. “If someone asks me if they can go for a ride in a 38, the answer is yes. If someone asks if they can demo a 35, the answer also is yes. Want a fishboat? We’ve got one of those too with a tower that goes up and down. Diesels? Yep we’ve got you covered there, too.”

Look for the Statement crew at the show as well as on the Florida Powerboat Club‘s Miami Boat Show Poker Run following the show.