Your go-to source for performance boating.
HomeIn the NewsState of the Industry, 2012: Part IX—Bob Teague

As the high-performance marine industry faces new challenges, many companies will be putting their best foot forward to continue to advance the sport over the coming years. There are a lot of questions surrounding our market, so we thought now was as good a time as ever to sit down with nine of the most knowledgeable and respected people in the business to get their thoughts on the immediate future and the most pressing issues facing this industry.

This is the final installment in speedonthewater.com’s nine-part series. For those interested, we have combined all the interviews into one long feature titled, “State of the Industry, 2012: Nine Leaders Speak Out.” 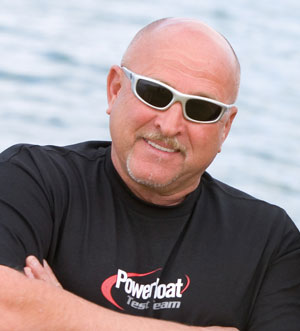 How do you anticipate engine emission regulations affecting the industry in 2012?

The test procedures and certification process is extensive and expensive. At this point, only three high-performance engine manufacturers are certified and approved to sell engines in California. Mercury Marine’s high-performance offerings comply as a result of corporate averaging allowed over the company’s complete product line. Ilmor’s 650- and 725-hp V-10 engines are compliant as standalone engines. At Teague Custom Marine (TCM), the family of engines from 825 to 1365 hp has been certified as CARB compliant as standalone offerings. Canada accepts engines that are CARB compliant for sales into its country.

Boat manufacturers are being required to install carbon canisters and systems to minimize fuel vapor emissions. Fuel tank material is regulated and fuel lines must be certified as low permeation. The regulations apply to new engines regardless of the year of the boat they are being installed in. Engine manufactures and installers share the responsibility for compliance.

During 2012, current certified engine manufacturers are finalizing their compliance testing and procedures to meet EPA standards that will go into full effect for the high-performance engines in January of 2013. The EPA and CARB emission standards are similar with a few variances in the test procedures. Current engine manufactures were required to apply for extensions with the EPA a few years ago as part of the approval process.

The result of these ongoing requirements has caused the three engine manufacturers to spend quite a bit of money and time to achieve compliance. As a side benefit, I feel that the overall performance and durability of the engines produced at TCM are comparatively superior as a result. Ilmor and Mercury Marine also have improved products as a result.

The emissions regulations are already limiting boat builders and shops re-powering boats to fewer engine options. Many engine manufacturers have decided to not offer California compliant engines. 2012 will be the year that the remaining engine builders will have to decide if they are going to comply with the EPA requirements. If they do not, they will no longer be able to offer new high-performance engines.

What are your thoughts regarding the effects of E15 on marine engines?

Tests have already been conducted under the guidance of the National Marine Manufacturers Association (NMMA). All indications at this point are that the use of E15 fuel will have a detrimental affect on engine reliability. This is especially true for high-performance engines. Fuel tanks, hoses and seals are also impacted by ethanol in fuel.

Is it difficult to develop innovative products, and do you plan to introduce anything new in 2012?

Our company is always striving to refine the current engine product line while adding more features for integration into the latest electronics. And TCM is constantly developing new stainless-steel rigging components and hardware, including a recently released line of adjustable water pickups for boats with notched bottoms and a new line of ultra heavy-duty sea strainers.

TCM also has developed digital trim indicator kits that can function separately from the engine ECM. This will allow all boats with any engine package to have digital LED indicator panels instead of manual cable-operated indicators. TCM has developed a series of potentiometers and brackets that mount on various trim tabs and planes. New drive package options will be released in 2012 and a new naturally aspirated engine package is in the works.

Finally, TCM has just completed validated upgrade programs performed in conjunction with rebuilds of Mercury Racing engines for 525EFI to 1075SCi. The 525EFI program includes a cylinder head exchange program for newly developed CNC ported heads. The head upgrade program is just part of the Stage IV upgrade of the 600SCi and 700SCi engines. The final product produces in excess of 870 hp on 91-octane gasoline. Also, the Stage IV upgrade for the 850SCi and 1075SCi, which includes the installation of the Whipple 2.9 liter Quad Rotor setup with huge power gains, will be validated by January 2012.

Do you expect to see many changes in the world of high-performance boat insurance?

As some carriers are dropping out of the market, others may look at the opportunity. I feel that some of the carriers are now starting to look at positive factors such as experience, driving record and credit rating to justify providing more affordable rates.

What do you think needs to be addressed in regard to safety concerns when it comes to both pleasure and race boats?

Performance boat design and construction has improved considerably over the last several years. Many of the original-design stepped bottom boats had their quirks, which resulted in undesirable characteristics, especially in turns. Most catamaran builders now offer designs that handle well at all speeds without porpoising or leaning out in turns. In all, boats and construction are better.

Many of the improvements in the offshore world have evolved through boat manufacturers’ involvement and participation in racing. Ultimately, what works well on a racecourse makes a better pleasure boat design.

What needs to be focused on is driver’s ability and attitude. I always say that “I don’t race my pleasure boat and I don’t pleasure my race boats.” The pleasure-boat operator needs to run his/her boat in accordance to the least comfortable person in the boat. In all cases, the boat operator needs to check his/her ego at the dock. Poker runs are not races. Many of the poker run producers are now also offering a “shootout” event separate of the poker run. One of the reasons is to encourage people to run their boats fast in the controlled environment with safety resources in place as opposed to during the less-structured environment of the poker run portion of the event.

Operators must be sober. The Lake Havasu Marine Association developed a Designated Operator program that is sponsored by TCM and Romer Beverage that has made a big difference in the Colorado River area. This program has the support of the various enforcement agencies as well as many participating businesses. Other municipalities throughout the country are inquiring about starting their own similar programs. I encourage them to do so.

While there are several styles, types and classes of races boats, I am focusing on the offshore category. Most of the open-cockpit boats are now running in the GPS bracket classes. Many of these boats could double as a pleasure boat. And because of the experience of most of these racers, I feel confident that they operate these boats in a saner manner if they are part of a poker run. Most of the safety improvements have been focused on the canopied race boats. Over the years, offshore race boats have become safer with systems developed primarily by manufacturers. Many of the improvements have evolved by examining failures of previous systems. There have been construction and design standards suggested by sanctioning organizations, but not enforced. But as a rule, the canopied race boats are safer. The more sophisticated canopied race boats required more sophisticated rescue procedures. While some organizations have done a decent job providing dedicated trained rescue personal and procedures, it is not universal.

Saltwater Drowning Named Cause of Death for Morgan and Tillm...