Your go-to source for performance boating.
HomeIn the NewsState of the Industry, 2012: Part I—Fred Kiekhaefer

As the high-performance marine industry faces new challenges, many companies will be putting their best foot forward to continue to advance the sport over the coming years. There are a lot of questions surrounding our market, so we thought now was as good a time as ever to sit down with nine of the most knowledgeable and respected people in the business to get their thoughts on the immediate future and the most pressing issues facing this industry.

Each weekday from Jan. 9 through Jan. 19, we’ll bring you another panel member’s answers from this nine-part Industry Focus Group feature. Not quite ready to dive into the New Year? Check out our list of the biggest stories of 2011. 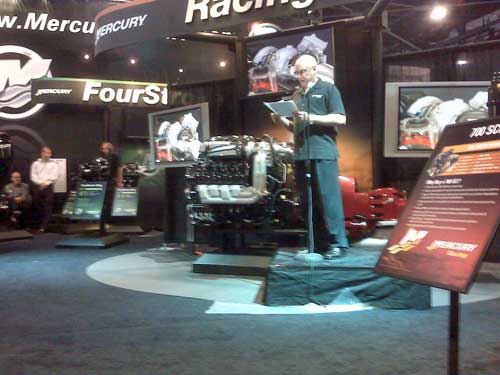 Do you expect to see positive industry progress in 2012?

The marine industry will slowly crawl back. Mercury Racing business will improve in 2012, but not by much, and never back to the levels of 2006. The incompetence in Washington and the worldwide economic destruction has changed consumer behavior forever. Those of us who scaled back during hard times, yet retained the capacity to innovate, will endure — even prosper — but not like before.

How do you anticipate engine emission regulations affecting the industry in 2012?

2012 regulations are pretty much set; Mercury’s offerings are compliant. We’re working in 2012 to get the international governing bodies to adopt U.S. EPA (Environmental Protection Agency) emissions standards. One worldwide standard would make life much easier for all manufacturers and be better for the environment. In 2012, there are products we simply will not offer for sale in some parts of the world because either the cost or capability to comply with local standards vastly exceeds any potential financial return.

What are your thoughts regarding the potential harmful effects of E15 on marine engines?

E15 is a bad idea. First, E15 makes an engine run hotter, which we have shown can cause engine failures. Older engines were not designed to accept E15. The opportunity for mis-fueling is real and damage can be expensive. Second, while next-generation engines can be designed to run on E15, new (and old) boats will have a more serious problem. Alcohol absorbs water, whether from condensation in fuel tanks or introduced with bad fuel, and can separate leaving a layer of water at the fuel pickup. Last I checked, marine engines run over water, not on it!

Also, ethanol will clean out fuel system deposits and can form sludge in the fuel tank that can’t get through the pickup. Furthermore, ethanol can destroy composite fuel tanks. None of this is good. At sea, you cannot simply pull over to the curb and call roadside assistance.

The California Air Resources Board (CARB) wants to go to an E10 certification fuel for engines, but EPA has proposed E15. We can live with what CARB wants, but are trying to educate EPA on the hazards of E15. Sadly, I believe the push toward E15 is driven by the ethanol lobby and a desire to appear “green,” not by science or any risk/benefit analysis. I think government should end ethanol subsidies; farmers should grow corn for people and livestock to eat.

What event(s) are you most looking forward to in 2012?