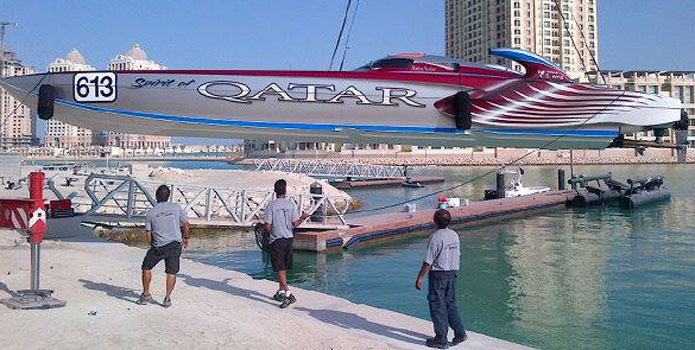 Headquartered in the Orlando, Fla., the Spirit of Qatar team is looking to add a pair of mechanics for the 2015 offshore powerboat-racing season according to Steve Curtis, the team’s United States representative. The mechanics will work on the team’s 42-foot Spirit of Qatar 20 Marine Technology, Inc., catamaran, which is powered by twin 750-hp naturally aspirated, carbureted Ilmor Marine/Scorpion engines as well as its 44-foot Spirit of Qatar 613 Victory catamaran with twin Mercury Racing 1650 quad overhead cam turbocharged engines. Maintenance for the twin 1,800-hp and 3,000-hp engines the team has at is disposal for its 50-foot Mystic Powerboat’s catamaran will be outsourced to the same independent contractor the company used last year.

“We don’t need a full-time mechanic for that boat, frankly, because there really isn’t anyone to race,” said Curtis.”But we do need mechanics for the other two boats.”

Curtis said the team is looking for one mechanic with a specialty in fabrication and welding, and another with extensive experience in electronics. The pay scale will be determined based on qualifications and is flexible, but Curtis emphasized that one requirement for the positions is not. Applicants must be willing to relocate to Orlando if they don’t already live in the city.

“I’ve heard from people all over the world, including Norway and Dubai, who are interested, as well as people from all over America, but when they want to go home that gets awfully expensive,” said Curtis. “We really want people to be here. It’s a full-time job during the season, but we can structure the job so the mechanics are guaranteed a certain number of days per year and they could, for example, take off a month during Christmas.”