Your go-to source for performance boating.
HomeCommentarySome Clarity From Clearwater 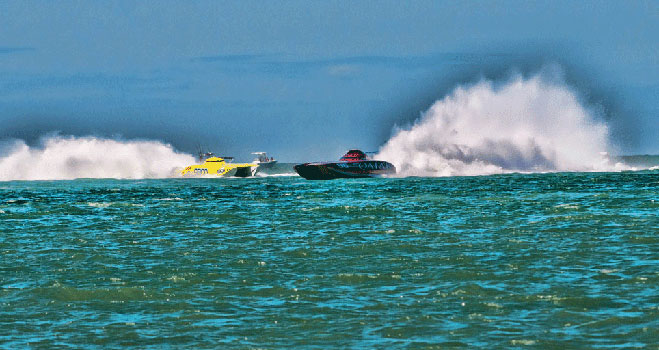 I have to admit, it’s been awhile since I’ve covered any offshore powerboat race other than the annual Super Boat International Key West Offshore World Championships. And even for that, I make it to the Key West Worlds almost every year as much for the Florida Powerboat Club’s Poker Run as for the offshore racing. Oh, and there is Duvall Street, but after a night—two at most—of that I’m done with the scene and more into comfortable dinners with old friends than late-night mayhem with total strangers and, OK, a bunch of younger old friends.

So I had no idea what to expect when the City of Clearwater, Fla., brought three travel/lifestyle writers and me into town for last weekend’s SBI National Championships. Of course, they invited and pampered us in hopes that we would write nice things about their fair city, and to that end I have nothing but good things to say about Clearwater and Clearwater Beach—especially as a venue for an offshore race. The dry and wet pits are close to another, and the idle along the Intracoastal Waterway and through the pass that leads to the Gulf of Mexico isn’t bad. About the only complaint I heard from the racers relative to logistics was that the wet pits could have used another crane—the waits to get boats in and out of the water on Saturday for testing were long.

From the sugar sand beaches to the hotels that lead to them, the view of the entire racecourse is unobstructed. If there’s a better place to watch an offshore race, I haven’t seen it.

Read More: Some Clarity From Clearwater