Earlier today, John Tomlinson of Miami-based TNT Custom Marine and I logged some time in the new Italian-made Revolver 42 for a feature that will run in the upcoming September/October issue of Speed On The Water digital magazine. A hybrid of a high-performance sportboat and a comfortable compact cruiser, the air-conditioned 42-footer boasts a unique hardtop roof with a power-retractable tempered-glass section in an aluminum frame. 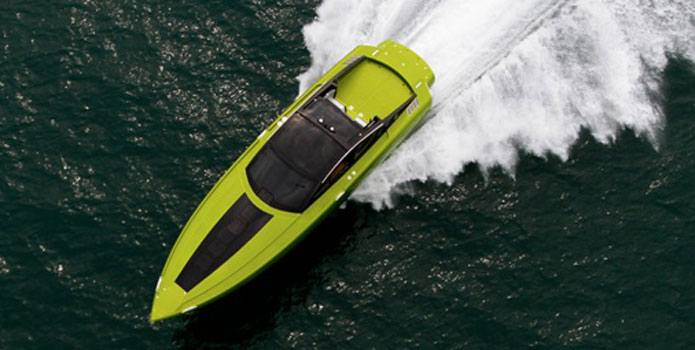 Look for an in-depth story on the Revolver 42 in the next issue of Speed On The Water magazine.

That feature proved exceptionally handy today, as it has been raining nonstop here since 3 a.m.—at least that’s when the thunder and lightning woke me up. Had the 42-footer come with a standard open cockpit, we wouldn’t have run it today. The rain was just too relentless. Suffice it to say that a design feature that raised my eyebrows when I first saw it in person at TNT a couple of months ago made me a believer this morning.

What else can I tell you about this innovative offering, which was designed by Michael Peters and has an 11-foot beam, without spoiling the surprises of the upcoming feature? Here’s one goodie: With a pair of Mercury Racing 662 SCi supercharged engines—the European Union-certified version the popular 700 SCi—providing the power, the boat tops out in the mid-70-mph range, handles well and has bunch of innovative features such as a power-operated flip-down transom that converts to a swim platform and convenient drawer-style refrigerators in the aft section of the cabin.

Tomlinson piloted the 42-footer today in driving rain—check out the raindrops on the boat’s tinted see-through roof.

Beyond that, to find about more about the intriguing Revolver 42 you’ll have to check out the September/October issue of Speed On The Water digital magazine. Look for the next issue, which is downloadable at no charge, to go live in early September.