When it comes to performance boats, there’s no denying the Miami International Boat Show is the industry’s premier event. But just 25 miles north on I-95, where thousands of boaters gather each fall for the Fort Lauderdale International Boat Show (FLIBS), many of the powerboat industry’s heavy hitters go all out for the show. And with go-fast boats expected to take center stage, there’s a lot of buzz surrounding the 53rd annual boat show, which is scheduled for October 25-29 at the Bahia Mar Yachting Center. 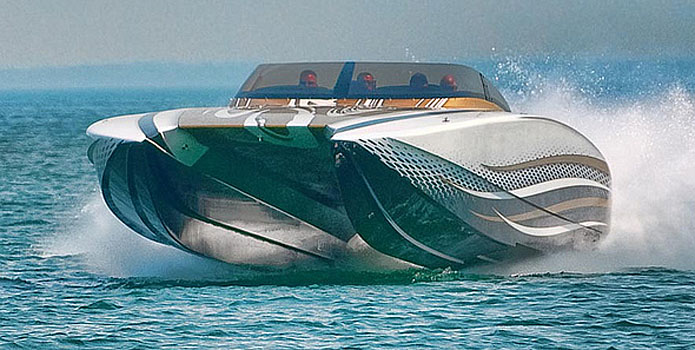 Skater Powerboats will have a new 412 catamaran with twin Merucy Racing 1100s on display at the Fort Lauderdale International Boat Show. Photo by Naples Image

New this year, attendees will enter the in-water portion of the show through the new “HI Performance Village,” located along H/I Dock. According to organizers, the redesigned section of the show will feature a layout highlighting boats and accessories comprising the performance boat market.

Many of the usual suspects, including Cigarette Racing, Formula Boats and Nor-Tech Hi-Performance Boats, will have new boats on display, but joining the village this year is Skater Powerboats by Douglas Marine and the much-anticipated return of Baja Marine. Here’s a quick look at some of the can’t-miss displays of the show.

Baja is planning to showcase four models featuring the company’s new DesignTECH graphics, including the all-new Baja 30 Outlaw GT. Joining the 30-footer will be a 247 Islander, a 26 Outlaw and a 278 Performance.

As usual, Cigarette will have a healthy lineup of V-bottoms on display, including the top-of-the-line 42 Huntress—a model with quad Mercury Verado 300s and another with five Verado 350s—and the sporty 42X featuring a new elongated engine hatch and sun pad. Two 39-footers also will be in the water—the fishing-friendly 39 Top Fish Open and center-console-inspired 39 Top Gun Open minus the fishing accessories.

Baja Marine will debut the new 30 Outlaw GT at the end of this month in Fort Lauderdale. Stepping up its showing, Deep Impact Boats will have displays in the water and in the indoor portion of the show at the Greater Fort Lauderdale/Broward County Convention Center. Inside, the company will have two 36-foot center consoles—the 36 TE and 36 Cabin—as well as a 39 Open. A deep blue four-engine 39-footer will be in the water next to a bright red 36 Open, but the real news is the new 33-footers that are expected to be dockside. A luxury sport boat with plenty of seating, the 33 LS, will be joined by the 33 TE fishing model. Sales director Tim Gallagher said the crew is working around the clock to get the models ready for the show.

Between indoor floor space and boats at the docks, Formula Boats will have representation across its entire line. Looking for a sizable cruiser? Check out the 37 Performance Cruiser, 400 Super Sport or 45 Yacht. How about sporty and more manageable? Formula’s 290 Bowrider, 310 Sun Sport and 310 Bowrider will be on display. And for those in between, Formula is bringing the 34 Performance Cruiser, the 350 Crossover Bowrider and the 350 FX6.

Making the trip from New York, Hustler Powerboats will have a new 39 Rockit powered a pair of Ilmor High-Performance Marine MV-10 725 engines with Indy drives in the water. Paul LoGiudice, Hustler’s VP of marketing and sales, said the six-step 39 Rockit has been a strong seller this year and that the Ilmor package should produce a top speed of 110 mph or faster.

Nor-Tech also will have a presence in the water and inside the convention center with five different boats. The show will mark the debut of the new 392 Super Fish as well as the 298 Sport. Also on display will be a 420 Monte Carlo, a 340 Sport and 390 Sport Open.

For the first time, Skater Powerboats will have a boat on display. Owner Peter Hledin said he’s excited to be a part of the show and will be featuring a new 412 catamaran with twin Mercury Racing 1100 engines.

Statement Marine has confirmed its attendance at the show, although information on what boats will be on display was unavailable. The company’s models will be at the convention center in conjunction with its dealer, NewBoatsDirect.com.

In another move to bolster the show’s high-performance powerboat exhibitor segment, the organizers have teamed up with the Florida Powerboat Club. “We always celebrate the kick-off of the Key West Poker Run during the Lauderdale Show,” said Stu Jones, the president of the Pompano Beach, Fla.-based club. “This year, the show’s management invited us to move all our festivities, which we normally do off site, into the show on the performance dock—they want to breathe life into the Performance Village that week. So we’re going to have our annual kick-off party there on Friday, October 26, starting at 8 p.m., and anyone can come down to the party and enjoy it without having to pay a show admission.”