While the Lake of the Ozarks Shootout in Missouri captured the majority of spectator and media attention last weekend, the concurrent Supercat Fest at the Camden on the Lake resort attracted a spectacular custom high-performance catamaran fleet of its own from owners across the country. Among the boats that created the biggest buzz and consistently drew the largest dockside crowds was a new 46-foot Skater Powerboats catamaran—without a transom bustle—that was delivered to its Milwaukee-based owner during the event. 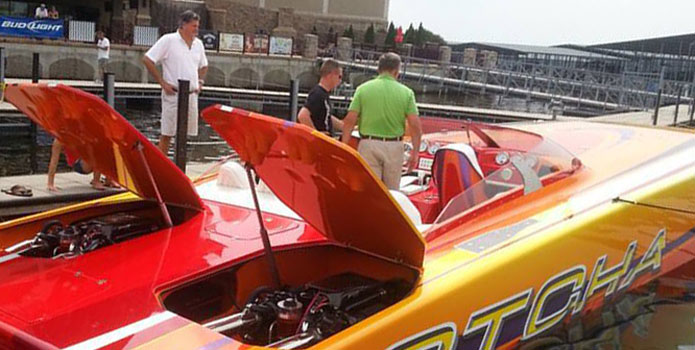 Delivered to its owner last weekend at Supercat Fest on Missouri’s Lake of the Ozarks, this 46-foot Skater catamaran was a consistent crowd favorite. Photo courtesy Blume Loe. (Click image to enlarge)

A pair of Mercury Racing 1350 engines power the cat, which seats six. The boat was set up with 1.4:1 drive gear ratios to maximize acceleration rather than the top end, which according to Skater dealer Blume Loe is in the 150-mph range.

“The boat was finished at Skater the week before the Shootout, and then on Sunday it was delivered to Mercury Racing where (product integration manager) Mike Griffiths went through the whole thing,” said Loe. “On Tuesday, they ran it on Lake Winnebago (near Mercury Racing’s facility in Fond du Lac, Wis.) and the owner came out. They gave him some basic orientation on running the boat and familiarized him with its systems, including SmartCraft.”

Called Gotcha, the 46-footer, which boasts two 12-inch Garmin GPS monitors flanking a 15-inch Garmin unit on the dash, was delivered on Thursday before the Shootout, just in time for the owner to take the Tres Martin’s Performance Boat School driving course. Between Thursday and Sunday, the owner, whose last ride was a 46-foot Cigarette V-bottom, reportedly put 18-1/2 hours on his new ride.

Said Loe, “I have clients who don’t put that much time on their boats in a month.”

In just four days, the owner of this new Skater 46 catamaran put more than 18 hours on the boat.