Your go-to source for performance boating.
HomeIn the NewsSjogren on Restorations: ‘People are always looking for value.’

Sjogren on Restorations: ‘People are always looking for value.’

Sjogren on Restorations: ‘People are always looking for value.’

Despite what appears to be an upturn in new high-performance powerboat sales—spurred largely by the center console model segment—so far in 2012, the demand for go-fast boat restoration services is growing. At least that’s what Scott Sjogren of Pier 57 in Waukegan, Ill., is betting on and to that end the Pier 57 service center will expand its focus on restoring existing models.

That, plus an offshoreonly.com message board thread, on a 32’ Active Thunder being restored at Pier 57, piqued my interest. So I called Sjogren today to find out a little more about the restoration end of his business and why he believes it makes sense for a lot of owners of older high-performance Here’s what he had to say.

With all the used-bargains out there—something you’ve championed yourself—why would someone restore an old boat rather than upgrading to a newer used one?

When the 32′ Active Thunder we’re working on now is done, it will look it was built in 2013. That’s how much you can do with restoration.

Are there better high-performance boat candidates for restoration than others?

You have to be careful about the brand of boat you restore. Honestly, and I am not saying this because Pier 57 is a Cigarette dealer, but you can never go really wrong with restoring an old Cigarette—there always seems to be a market for 38 Top Guns. 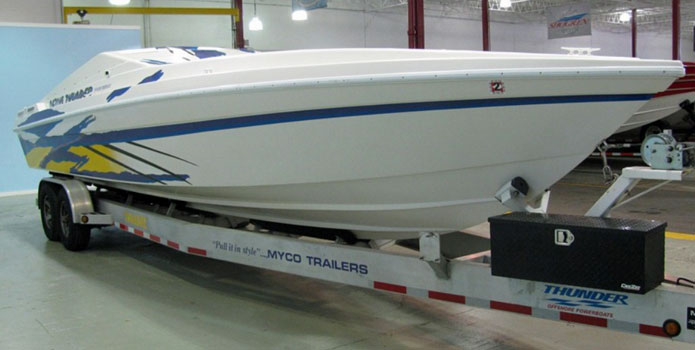 This 32-foot Active Thunder V-bottom currently is being restored by Pier 57.

You’re never going to get all of your money out of it, regardless. But to have everything you want in your current boat has to have some value, and it’s still much less expensive than trading out of your current boat and upgrading to another one.

Do you worry that the restoration business might cut into some of your new-boat sales?

No, that’s a completely different customer. The guys we’re going after have older boats with older engines, like the Mercury Racing HP500 and 525SC, in good condition. If a guy wants a new boat, he wants new-engine technology and he’s willing to pay for it. The worst thing you can do is convert to an old boat to new-engine technology. To install Mercury Racing 1350s, for example, in a 38-foot V-bottom from 1995 would be crazy. It wouldn’t make any sense financially.

So what can you expect for the various restoration elements such as new paint and upholstery to cost?

For the most part, the functionality of a boat really doesn’t change. People are always looking for value, and boats are expensive. Restoration is a great opportunity for people who can’t afford a new boat and can’t afford to trade out of their existing boats. We think more and more people are going to do this.