Sponsored by Lucas Oil Marine Products, the SilverHook offshore racing team has swapped out its twin 1,000-hp Sterling Performance engines for a pair of Mercury Racing 1075SCi engines in its 48-foot SilverHook Powerboats-built V-bottom. The first tests with the Mercury power in the stepped V-hull, which races in the Super Boat International Superboat Extreme class, happened yesterday according to Nigel Hook, the boat’s throttleman.

“We’re very, very happy,” said Hook in a telephone interview this morning. “The Sterlings had a lot of power up top, but they didn’t have as much as the Mercury 1075s in the midrange. We have a little more testing to do, and then we’re headed for the SBI race this weekend in Biloxi (Miss.).” 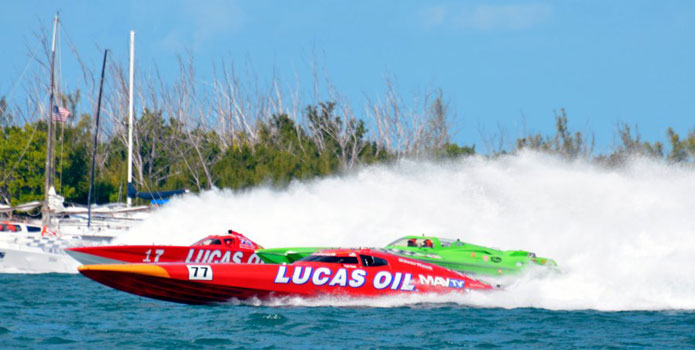 Hook said that engine fuel requirements were another key factor in his team’s decision to make the power change. The Sterling engines require 110-octane race fuel, whereas the Mercury engines run on 92-octane pump gas.

“We weren’t sure about the availability of race fuel during the season,” said Hook. “Now we can just pull up to the gas station and fill it up.”

According to Hook, who will run the Biloxi race with driver Miles Jennings from the Union International Motonautique Class 1 Fendi team, the SilverHook group plans to campaign the boat in several poker runs in addition to offshore races. Their goal in participating in poker runs this season is to provide expanded exposure for their primary sponsor of 14 years.

“All of the SBI races are on the table—we don’t plan on racing any other series,” said Hook. “But we do plan to do a number poker runs, starting with the one this Saturday in Biloxi so we can exposure Lucas Oil Marine Products to a completely different set of people.”

Michael Silfverberg, the team’s usual driver, has committed to the SBI races in Sarasota and Key West, Fla., according to Hook. As noted above, Jennings will handle the driving duties for the team this weekend. The only “set” position in the cockpit for the entire season, however, is Hook’s.

“We’re keeping it open,” said Hook. “Michael can’t make all the races this season—it’s a long way to Florida from Stockholm. We’ll see how the first race goes, and go from there.”