Destined to make a big splash in the near future, a new 32-foot Doug Wright catamaran owned by Daren Kittredge of Massachusetts hit the water in Sarasota, Fla., yesterday. According to Grant Bruggemann, whose shop handled rigging the all-carbon-fiber 32-footer with its Mercury Racing 400R outboard engines and more, it couldn’t have gone better.

Yesterday’s test session could not have gone better for Daren Kittredge and Grant Bruggemann.

“OK, it was a little cloudy and cool,” said Bruggemann, the owner and founder of Grant’s Signature Racing in Bradenton, Fla. “But the boat, which is the new-generation Doug Wright 32 hull, ran great. Daren and I did quite a bit of testing—we were out there for about an hour and a half. We ran mostly on Sarasota Bay. We did go out to the Gulf through Big Pass but it was really rough out there so we came back to the bay.”

WATCH NOW: IN THE LEAD WITH GRANT BRUGGEMANN

According to Bruggemann, he and his crew logged 360 man-hours rigging the cat while Jamie Borg of Cutting Edge Interiors created the boat’s six-seat interior. Doug Harrell of Doug Harrell Designs handled the paintwork.

“It turned out phenomenal,” Bruggemann said. “Daren was super happy.”

“It came out really nice,” said Kittredge, who plans to run the cat on Lake Winnipesaukee in New Hampshire this summer. “Grant does flawless work, Doug Harrell is great to work with and Jamie Borg did a great job on the interior. We like to keep it simple (with paintwork) because we don’t want to take anything away from the lines of the boat. Doug Wrights have such a beautiful shape.”

Viewed from any angle, Kittredge’s 32 Doug Wright is a beauty.

The new cat is the third Doug Wright catamaran rigging project Grant’s Signature Racing has handled for Kittredge. The first was another 32-footer that Bruggemann and his team rigged with Mercury Racing 400R outboards, while the second involved replacing the twin six-cylinder 400R outboards powering a 36-footer with their more powerful 450-hp V-8 Mercury Racing siblings.

“For the 32 Doug Wright, the 400s are the perfect fit—but the 300Rs also are a really great package for the boat,” Bruggemann said.

As reported earlier this week on speedonthewater.com, Bruggemann will be rigging a canopied 32-foot Doug Wright Super Stock-class raceboat with a pair of 300R outboards for Kittredge in the near future. Bruggemann will throttle and Kittredge will drive this season. The cat is slated to arrive at Grant’s Signature Racing in April.

Related stories
Pro Floors Racing Returning To Super Cat Action In 2022
Speed On The Water Video: In The Lead With Grant Bruggemann 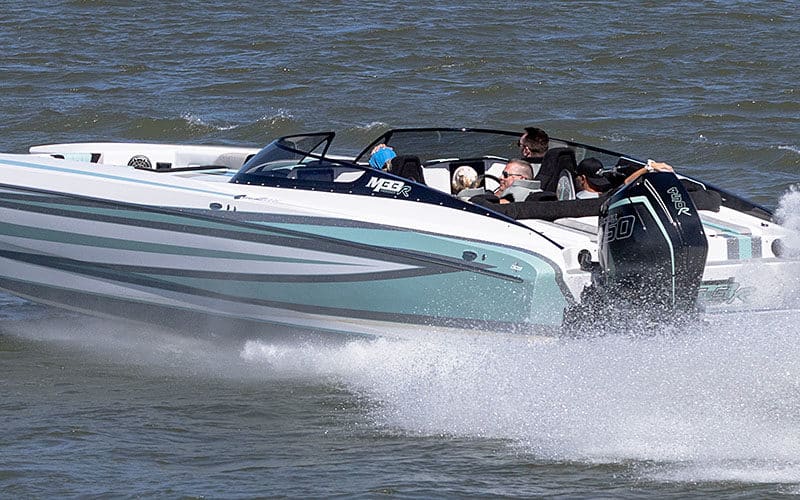