Rarely do major milestones such as a 25th anniversary coincide with a truly memorable event, but that’s exactly what happened at this weekend’s the Lake of the Ozarks Shootout in Missouri. While it may be topped in the future—that’s what the Shootout is all about after all—the 2013 event set new benchmarks for powerboat performance on the liquid-mile course. Of course, there are dozens of highlights from the past two days, but here are five standouts. 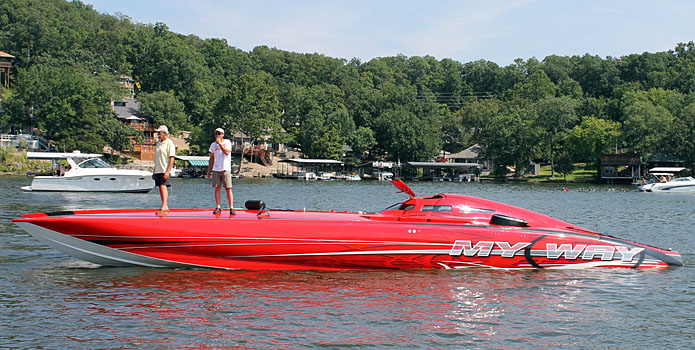 On its way back to the docks, the My Way Mystic catamaran reached a top speed of 224 mph today.

1. My Way Runs 224 mph: You could almost hear the crowd in the spectator fleet roar back at Captain Ron’s Bar and Grill when it was announced on the televised Shootout broadcast Bill Tomlinson’s 50-foot Mystic catamaran posted a remarkable top speed of 224 mph. And Tomlinson and his throttleman Ken Kehoe went out for another pass—216 mph for the record—because they thought the boat, the fastest boat in the history of the Shootout, had more.

4. Onken’s Mystic Runs 186 mph: Freshly rigged and barely run, Don Onken’s 50-foot Mystic catamaran with twin 3,400-hp V-16 supercharged engines made its first pass this morning. Mystic founder and owner John Cosker throttled the boat with Myrick Coil on the steering wheel, and they found themselves underpropped and on the rev limiters with their 37-inch-pitch wheels.

5. Speedonthewater.com Rides in Sterling 1700-Powered Skater: Yesterday, John Tomlinson and Myrick Coil piloted a 36-foot Skater catamaran with its pair of much anticipated 1,700-hp Sterling Performance engines to a class-winning top speed of 195 mph. This morning, speedonthewater.com’s Jason Johnson and I took a ride in the cat with Tomlinson and Mike D’Anniballe of Sterling, and the experience was like nothing either of us have ever had before on the water. Look for a complete feature on the remarkable 36-foot project boat and its power in the Nov./Dec. issue of Speed On The Water magazine.