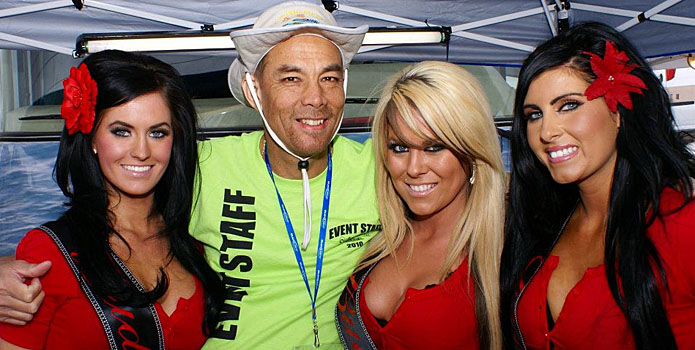 Although he lived in Northern California, Lenny Headley always found himself right at home in Lake Havasu City, Ariz.

From Arizona’s Lake Havasu to California’s Discovery Bay, action photographer and videographer, Len “Lenny” Allen Headley, was easily one of the most well liked individuals in the performance boat community. That’s why it was extremely sad to hear about the passing of Headley, 51, who died overnight in Northern California on August 14 from health complications.

The man behind the Shoot-2-Thrill.com cameras (not to be confused with Pete Boden’s Shoot 2 Thrill Pix), Headley, 51, regularly covered events such as the Desert Storm Poker Run on Lake Havasu and the Big Cat Poker Run in the Sacramento River Delta. Headley, who enjoyed making music, writing, and boating (of course), always had a smile on his face. He had an early, unheard of 25-year career as a successful computer software engineer, and then took to his love of photography after some economic downturns.

Headley was born in Hawaii, and lived up and down California as a military brat before settling back in the East Bay to be near the Delta. Despite being afflicted with Tourette syndrome, he didn’t let it affect his attitude.

According to his brother, Jay, he thrived when people embraced who he was and appreciated his friendliness, integrity, enthusiasm, intelligence and talents, especially in the boating community, which Jay said meant the world to him.

“Whenever Lenny proudly showed his amazing boating photos to everyone, he first and foremost always pointed out the ones behind the helm—as if he photographed these wonderful people who just happened to be boating,” Jay said.

Headley is survived by his father, Leonard, older brother, Jon, and younger brother, Jay. A memorial for Lenny will be held at 1 p.m. on Sunday, Sept. 15th at the Pittsburg (Calif.) Yacht Club.