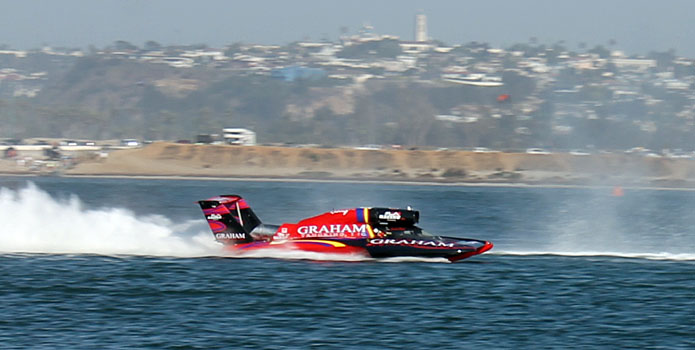 Although many lined up along San Diego’s Mission Bay Park were anticipating everything going according to script with veteran H1 Unlimited driver Steve David riding off into the sunset with his fifth national championship for the Oh Boy! Oberto/Miss Madison Racing team, that scenario was not meant to be as David was penalized for jumping the start in the final by 1/30th of a second and finished fourth rather than the second or better he needed to secure the championship.

By collecting his fourth victory of the season at San Diego Bayfair, Jimmy Shane played the spoiler in David’s Hollywood ending after announcing Friday he’s retiring after 25 years racing an Unlimited hydroplane. Shane, who in just second his second full season brought home the national championship for the Graham Trucking-sponsored Precision Performance team owned by Ted Porter of Formula Boats, was ecstatic about the victory as the points difference between first and fourth place gave him the 2013 driver and team championships.

The day started well for David in the Oh Boy! Oberto boat, besting Shane in Heat 2A to adding 100 points to his lead (Kip Brown in the Spirit of Qatar boat won Heat 2B). David won again in Heat 3A and Shane took the win in Heat 3B, leaving David with a 163-point lead heading into the final. Even before David received the penalty for “jumping the gun,” there was a little drama coming down the front straightaway as Shane got caught up in David’s roostertail and almost lost control.

“That’s probably the highest I’ve ever been in an Unlimited,” Shane said referring to the near mishap. (Click here to watch video of Shane’s awards ceremony speech.) “We did what it took to win, but it wasn’t the easiest getting there. Steve beat us in one of the qualifying heats, which set us back a little in the points race, but we knew that we had to race until the end. We knew that anything could happen in the final. Steve and I were both going at it hard, and things happen out on the water, but in the end we came out of it penalty free. We did exactly what we wanted to do here.”

David was quick to praise the 28-year-old Shane, who finished ahead of Tommy Thompson in Miss Peters & May boat and Greg Hopp in Miss DiJulio.

“I have known Jimmy since he was born and I’m proud that young guns like him have come along,” said David, who was off to have one last dinner with the team. “They are great people and great drivers, and I am confident with the future of the sport in their hands.”