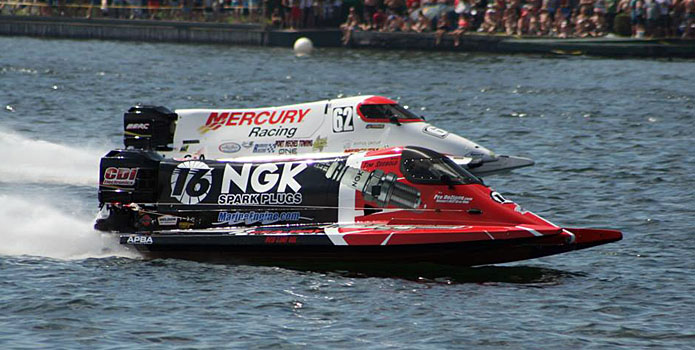 Although he evened up the total in the win column with his second straight US F1 Powerboat Tour victory in Valleyfield, Quebec, Canada, Tim Seebold is going to need a lot of help at the season finale in Seattle next month to surpass tour points leader Terry Rinker, who won the first two races of the season.

Racing in the NGK/Seebold Sports boat, Seebold bested Rinker, who finished second in his AMSOIL/Rinker Racing boat and Chris Fairchild, who took third in the Mercury Racing boat, in front of the large crowd on hand for the 75th annual Valleyfield Regatta. After four races, Rinker holds a 96-point lead over Seebold, who finished eighth in the season opener at Lucas Oil Speedway in Missouri.

“Not finishing higher up at Lucas Oil Speedway hurt us,” said Seebold, who admits he’s going to need a lot of things to go his way in Seattle to catch Rinker. “I’m looking forward to the race in Seattle. Seafair is a first-class event and one heck of a festival.

Joining the Valleyfield Regatta for the first time, the tunnel boats were one of many boat racing classes that took part in the event. Seebold said the organization of the event was great and that the US F1 Powerboat Tour seemed to be a nice addition to the program.

With 13 boats competing in the final race, Seebold jumped out to an early lead and never let up around the course, which included a right hand turn. Rinker and Fairchild stayed on his tail, but Seebold was too fast in his Mercury-powered boat.