Driving rain and wind in Miami forced Deep Impact to cancel the second sea trial of its new 39-footer, which will be unveiled at the 2011 Fort Lauderdale International Boat Show, earlier today. According Tim Gallagher of the Miami-based company, they will try to run the center-console model again tomorrow.

“We got in one run today, but the rain was just too hard to really get anything accomplished,” said Gallagher. “So we packed it in. We’ll be back out there tomorrow.”

Gallagher said that he was “very pleased” with the boat’s performance in its first sea trial yesterday. With other members of the Deep Impact team on board, he ran the boat in the protected water of Biscayne Bay, as well as offshore from Haulover Inlet to Government Cut.

“It was by no means calm out there,” he said. “And the boat handled it really well.”

Triple 350-hp Mercury Verado outboard engines power the prototype. Gallagher said that while he is not ready to release performance numbers, which he described as “good,” at this time he hopes to be able to provide some after tomorrow’s sea trial.

“This ‘test boat’ really is a test boat,” said Gallagher. “We weighted it with sand bags to simulate the weight of equipment and dropped in a plywood floor and old console from another model to get the boat on the water. We ran it at a heavy 14,000 pounds and also at 15,700 pounds—then added eight people.  The boat was very impressive, even at 17,000-plus pounds.” 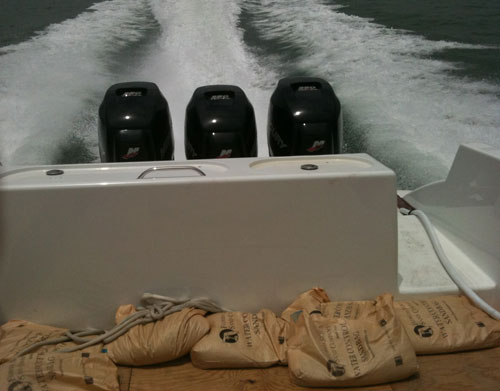