Shown here, the first six-seat open-cockpit 50′ Mystic had turbine engines. The model currently in production will have supercharged piston engines.

“It’s our first real mainstream piston-engine-and-No.6-drive boat,” said Cosker. “It’s not our first gas engine boat—we had the Bud Light and Longlite boats—but the majority of our boats have been turbine and we want to build some mainstream blower engine boats.”

The cat is slated for completion in spring 2012. “We want to have it ready for the 2012 boating season,” said Cosker.

Cosker returned to his shop in DeLand, Fla., from Italy, where he tested the Mystic-built SilverHook offshore racing V-bottom, late last week. In addition to the new 50-foot cat pleasure-boat project, he came home to the Miss Geico raceboat and its much-needed repairs thanks to a solo accident during an offshore race in Michigan City, Ind. (Read the complete story.)

Repairs to Miss Geico at the Mystic shop will begin this week.

“They hit hard,” said Cosker. “The said they saw 8 Gs in the cockpit, but when you take the pendulum effect of the boat coming down, the front of the boat probably saw in excess of 14 or 15 Gs. It broke one of the original pickleforks, right at the seam where it was joined. When we originally designed and built the boat seven years ago (the Miss Geico cat originally was the Longlite cat), you could take off the pickleforks and the wing—you could take off the entire front of the boat.

“We’ll glass it back together,” he continued. “All the internal structure is fine, and there wasn’t really a delamination. Where the picklefork broke off, the skin broke and peeled. It should be fixed on our end in a couple of weeks.”

August is hectic for Cosker. At the end of month he’ll head to Missouri for the Lake of the Ozarks Shootout. Cosker said that while Fly Boy will be there “as a pleasure boat,” another turbine-powered 50-foot Mystic actually might compete in the event. Beyond that, he declined to provide detail.

The week after the Shootout, Cosker will attend the Cannes Boat and Yacht Show in France for the official introduction of the Mystic yacht line. 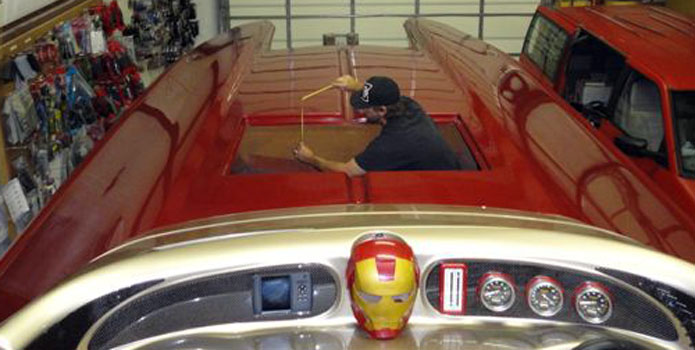